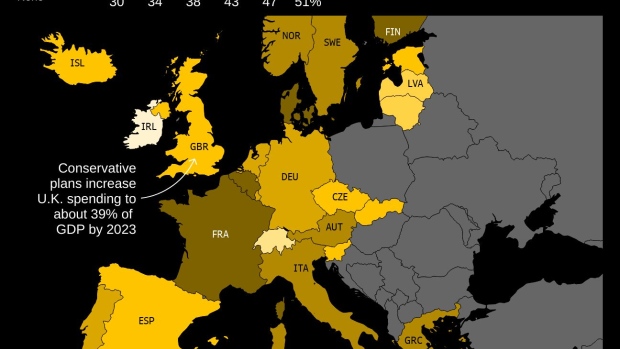 (Bloomberg) -- Britain can expect an end to austerity under Boris Johnson -- but little more -- with his cautious rather than spectacular plans focused on extra spending for schools, health and infrastructure and tax cuts for workers.

The prime minister, who led his Conservative Party to an emphatic victory in Thursday’s election, gambled on prudence when it came to the public finances, offering to spend just one extra pound for every six pledged by the Labour opposition.

Whereas Labour leader Jeremy Corbyn was promising German-style levels of public spending at close to 45% of gross domestic product, the burden under the Tories is set to remain under 40% and slightly below the average over the past 50 years.

Spending under the Conservatives will be closer to Spain, leaving Britain below the average of advanced economies. And the state envisaged by Johnson is minimal when compared with countries such as France, Finland and Italy.

Nonetheless, even a modest reopening of the spending taps will be welcome in a country that has experienced 100 billion pounds ($134 billion) of spending cuts and tax increases since 2010 as the government sought to bring down the budget deficit, which hit a towering 10% of GDP in the aftermath of the financial crisis.

The squeeze came at a heavy price for public services and welfare, fueling the backlash that erupted in the 2016 vote to leave the European Union and cost Johnson’s predecessor, Theresa May, her parliamentary majority a year later. Labour had hoped to win votes by arguing a decade of Conservative government had inflicted excessive hardship. Instead, voters in Brexit-supporting areas turned their fire on Labour for backing a second referendum.

The Conservatives are promising to get Britain out of the EU by the end of January and hold a budget in February, allowing Johnson to deliver on his pledge to cut payroll taxes by 85 pounds a year for every worker.

If they carry out their tax and spending plans, the budget deficit is set to rise modestly from around 2% of GDP, with new fiscal rules allowing for an extra 20 billion pounds of borrowing a year to fund investment in infrastructure. That should provide a modest spur to growth, as investment has a much bigger impact on the economy than government money spent on wages and public services.

Economists see several risks to the fiscal outlook, however, not least the possibility that the deficit could rise much more sharply if trade talks with the EU fail and Britain ends up without a deal when the proposed Brexit transition period comes to an end at the end of next year. Such a scenario could see borrowing at closer to 4% of GDP, according to the Institute for Fiscal Studies.

Johnson is promising to provide tens of billions more for the National Health Service, teachers and policing in the coming years, without breaking a commitment to keep revenue and day-to day spending in balance.

But given the clamor for extra resources across the public sector, and an uncertain economic outlook, the Conservatives may find it hard to keep to their plans. With an estimated current-budget surplus of just 5 billion pounds by 2024, they could easily find themselves having to borrow more or raise taxes.

“The fiscal plans in the Conservative manifesto imply the current budget will remain in surplus by the smallest of margins in coming years,” said Dan Hanson of Bloomberg Economics. “It would only take a small forecast error to move it into the red.”

There are also doubts over the Tories’ investment plans, which would push Britain up the international rankings and take capital spending to levels last sustained in the 1970s.

The manifesto set out 22 billion pounds of firm commitments over the next four years and the government is expected to announce additional proposals in the budget. Delivering projects could prove harder in reality, particularly in the short term as the government grapples with Brexit-related labor shortages.

To contact the reporter on this story: Andrew Atkinson in London at a.atkinson@bloomberg.net

To contact the editors responsible for this story: Fergal O'Brien at fobrien@bloomberg.net, Brian Swint