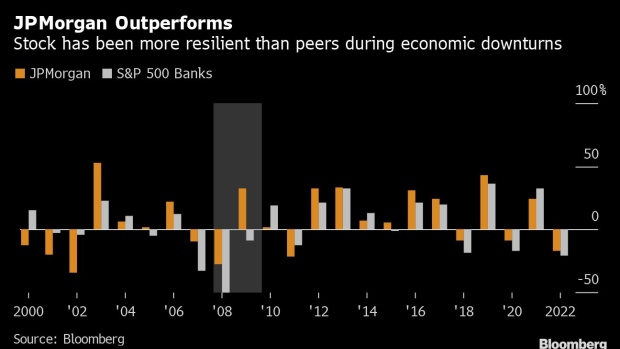 A monitor with JPMorgan Chase & Co. signage on the floor of the New York Stock Exchange (NYSE) in New York, US, on Wednesday, Nov. 9, 2022. US stocks declined following midterm elections that failed to yield a Republican sweep. Treasuries and the dollar caught bids in a sign of deteriorating risk sentiment. Photographer: Michael Nagle/Bloomberg , Bloomberg

The Jamie Dimon-led bank was upgraded by two notches to a buy-equivalent rating at Morgan Stanley, which said the lender is typically more resilient than rivals during downturns. The upgrade, by analyst Betsy L. Graseck, leaves JPMorgan with no sell or equivalent ratings among analysts tracked by Bloomberg.

JPMorgan’s price-to-earnings multiple didn’t drop as much as peers during past recessions, Graseck wrote in a note to clients. Cost management is also improving, with operating leverage turning positive, while the bank is making progress on meeting higher capital requirements, she added.

“In a hard landing bear case scenario, we find JPM has historically de-rated less than peers in recession,” Graseck said. She raised her price target to $153, suggesting about 16% upside to Monday’s close.

JPMorgan shares rose as much as 2.9% on Tuesday. They have fallen 17% this year, outperforming a 21% drop for the S&P’s Banks Index.

With recession looming, analysts are looking for parallels in the Great Financial Crisis. During 2008, JPMorgan shares fell 28%, while its main rivals -- Bank of America Corp., Morgan Stanley, Goldman Sachs Group Inc. and Citigroup Inc. -- all slumped more than 60%.

As for the current valuation, JPMorgan shares are trading at 10.3 times forward earnings. That’s not much above their trough in the past two decades, while peers have a lot further to fall to their trough valuations, Morgan Stanley said.

The upgrade follows a good few months for the biggest US bank, which in October reported its highest quarterly net interest income ever and raised its guidance for the year as it benefits from the Federal Reserve’s interest-rate hikes. Still, Jamie Dimon said at the time he doesn’t think the US can avoid a recession.