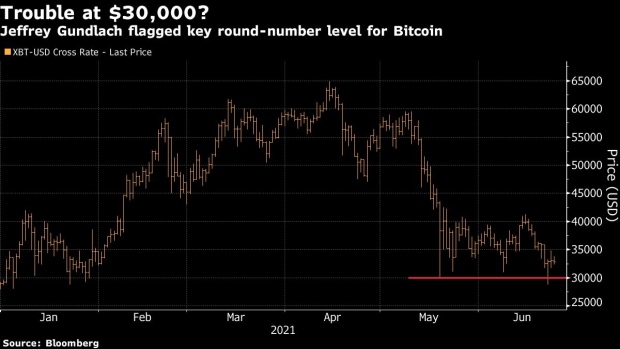 Anticipated selling of shares in a major Bitcoin fund between June and July will likely become a fresh source of pressure on the world’s top cryptocurrency, according to JPMorgan Chase & Co.

While weak flows and price dynamics resulting from last month’s selloff fueled Bitcoin’s recent declines, possible sales of shares in the Grayscale Bitcoin Trust upon the expiry of a six-month lockup period could be an additional headwind, JPMorgan strategists led by Nikolaos Panigirtzoglou wrote in a note Wednesday.

Bitcoin has remained under pressure in recent days, falling briefly below the key $30,000 level Tuesday, amid persistent concerns about its energy use and China’s expanded crackdown on the digital currency. It dropped 1.1% at $32,709 at 1:27 p.m. Hong Kong time on Thursday, down about 50% from its record high near $65,000 in mid-April.

“Despite this week’s correction we are reluctant to abandon our negative outlook for Bitcoin and crypto markets more generally,” JPMorgan’s strategists said. “Despite some improvement, our signals remain overall bearish.”

Separately, DoubleLine Capital LP Chief Executive Officer Jeffrey Gundlach said on Twitter Thursday that “it’s a big deal” if Bitcoin closes below $30,000, without elaborating. The ability to hold on to that level is thought by some to be key to the cryptocurrency’s future trends.

Bitcoin’s fair value, based on a comparison of its volatility versus gold, is seen in a range of $23,000 to $35,000 in the medium term, JPMorgan’s strategists wrote. “It would still take price declines to the $25,000 level before longer-term momentum would signal capitulation,” they said.