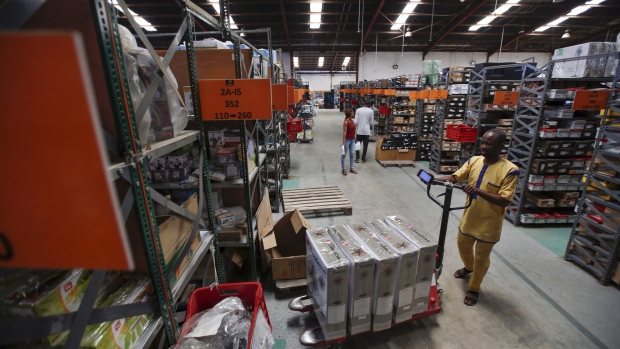 A worker pushes a pallet truck of stock inside a Jumia Technologies AG distribution warehouse in Lagos, Nigeria. , Bloomberg

(Bloomberg) -- Jumia Technologies AG has identified cases of improper transactions at the Africa-focused online retailer’s Nigeria business that amounted to as much as 4% of first-quarter sales.

While the Berlin-based company says it’s taking measures to cut out instances of corruption, the findings backed up warnings made by short-sellers Citron in a report three months ago, which brought an abrupt end to a share-price rally following Jumia’s initial public offering in New York the previous month.

Jumia found cases where “improper orders were placed and subsequently canceled.” These included deals made through a team of independent Nigerian sales consultants called J-Force. The transactions in question amounted to 2% of 2018 gross merchandise volume -- a term for sales used in online retailing -- rising to 4% in the first quarter of 2019.

In advertising for candidates to join J-Force, Jumia promises the opportunity to “earn unlimited income” while having “complete freedom and control over your activities.” Nigeria is ranked 144th on a list of 180 countries on the Corruption Perceptions Index, compiled by Transparency International.

The report of dubious sales practices comes after Citron called Jumia “an obvious fraud,” wiping out early gains from the IPO. The stock has lost more than half its value since, and closed Monday at $14.75 -- just above the $14.50 listing price.

Jumia said second-quarter operating losses widened by 60% to 66.7 million euros ($74 million), mainly due to an increase in costs related to the vesting of share options following the IPO. Customer numbers across its 14 countries rose to 4.8 million, up from 3.2 million a year ago.

The “business model has severe vulnerabilities,” Tellimer Markets Inc analysts led by Nirgunan Tiruchelvam said in a note following the results. “The business is intensely cashflow negative and we have concerns about its viability.”

To contact the editors responsible for this story: Giles Turner at gturner35@bloomberg.net, Robin Ajello