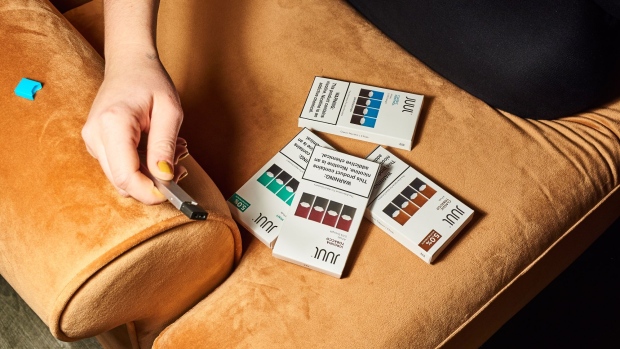 A person holds a Juul Labs Inc. e-cigarette next to packages of flavoured pods in this arranged photograph taken in the Brooklyn Borough of New York, Dec. 20, 2018. Bloomberg

Juul Labs Inc., the largest e-cigarette maker in the U.S., is suspending sales of most nicotine pod flavors nationwide, bending to pressure from officials and the public who said sugary flavors were hooking teens.

Fruit and dessert flavors, which the company was selling to people over 21 through its website, are no longer available in the U.S. pending a review by the Food and Drug Administration, Juul said. It will continue selling mint, menthol and tobacco flavor pods in stores and online.

The creators of Juul have said they designed e-cigarettes to help longtime smokers switch, but the popular devices have also introduced a generation of teens and young adults to nicotine. Scott Gottlieb, the former FDA commissioner who declared youth vaping an epidemic, said Juul’s decision to continue selling mint and menthol won’t solve the problem. “Mint is a candy flavor,” Gottlieb said. “A lot of the youth use has shifted to that flavor.”

Juul said the new sales restriction comes out of a review led by the new chief executive officer, K.C. Crosthwaite, who joined last month from tobacco giant Altria Group Inc. As part of that review, Juul said last month it would stop all U.S. advertising, refrain from supporting a proposition to voters in San Francisco that would reverse an e-cigarette ban and stop lobbying the government about legislation related to flavors. Michael Bloomberg, the founder and majority owner of Bloomberg LP, funds anti-vaping advocacy initiatives, including one to defeat the San Francisco ballot measure.

Shares of Altria, which sells Marlboro in the U.S. and is Juul’s largest shareholder, were up 1.2 per cent to US$44.05 at 2 p.m. in New York. “We must reset the vapor category by earning the trust of society and working cooperatively with regulators, policymakers, and stakeholders to combat underage use while providing an alternative to adult smokers,” Crosthwaite said in a statement.

The new policy began Thursday and affects sales on its website of the flavors fruit, creme, mango and cucumber. Online purchases of the remaining flavors will continue to be screened by Juul’s age verification system.

Juul had stopped the distribution of those flavors last November to physical retailers in the U.S., a move it made in anticipation of sales restrictions from the FDA on flavored e-cigarette products. That move led to a slight dip in sales, but the San Francisco-based company has largely recovered, thanks partly to international growth.

In the U.S., Juul controls 70 per cent of vape sales, according to market research firm IRI, which doesn’t track online sales. Investors valued Juul at US$38 billion in December, before growing outrage in recent months led to the departure of its previous CEO.

In September, Health and Human Services Secretary Alex Azar said that U.S. health monitors had seen a continuing rise in youth use, including of flavors like mint and menthol. He said the Trump administration’s goal was to ban those flavors and leave only tobacco-flavored e-cigarettes on the market.

Juul is still evaluating which products and flavors to submit for regulatory approval in May, which means some of these flavors could return to shelves if the FDA approves them. Josh Raffel, a spokesman for Juul, said the company could also extend its temporary sales ban to other flavors, such as mint and menthol. “We continue to review our policies and practices in advance of FDA’s flavor guidance and have not made any final decisions,” he said.