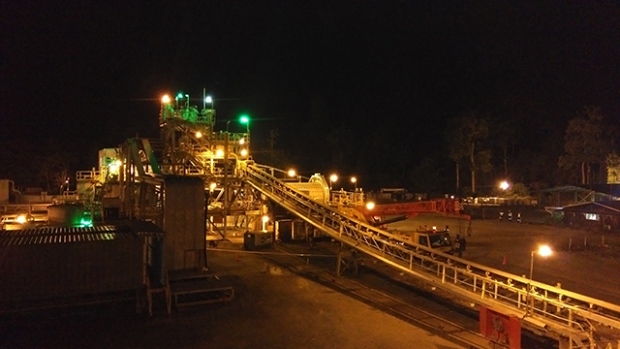 It didn’t take long after the first analyst tour of K92 Mining’s Kainantu Project in Papua New Guinea for bullish comments to start rolling in on this gold-copper asset that K92 acquired from Barrick Gold in 2015.

Production Fast Track with Massive Exploration Potential was the title of the Nov. 22, 2016 report issued by Clarus Securities analyst Nana Sangmuah after he spent time onsite in mid-November, alongside of other industry professionals from GMP Securities, Haywood Securities, and Macquarie. The site tour was hosted by K92 chief operating officer and director, John Lewins, and included visits to the underground operations, the processing facilities and surface infrastructure, and the large exploration tenements hosting multiple high priority exploration targets.

Further highlighting the upside, this post site visit report from Clarus notes, “We estimate a production growth rate of 200 per cent for KNT from 2017 to 2019, ahead of growth rate of peers averaging 21 per cent. Despite its compelling growth rate, KNT trades at a 0.3x P/NAV multiple, a ~60 per cent discount to junior producer peers trading at an average of 0.8x NAV.”

Haywood analyst Mick Carew commented in his initial post site visit report published on Nov. 23, 2016, “While the restart of mining at Irumafimpa represents a clear milestone for the Company, we see the medium- and long-term potential of the Kainantu project as particularly significant. With a recent PEA for the adjacent Kora deposit delivering a robust pre-tax NPV (five per cent) of US $415 million (US $386 million using an eight per cent discount rate) and an IRR of 113 per cent based on a 400,000 tpa operation, the current resource base at both Kora and Eutompi could be expanded.”

The past two months have been particularly busy for K92, with the company having commenced production from the Irumafimpa Deposit and then following it up by announcing the results of a PEA at the Kora Deposit, which is being targeted as the second deposit coming online. These two big fundamental achievements were recently described as the definition of a true “double-header," given that they concurrently occurred. With the restart commenced and given the company is providing clear guidance as to how it plans to dramatically grow production, K92’s recent share price represents not only a big discount to their peer group in terms of where the company is valued as a ratio of net asset value, but this is also combined with a much faster rate of production growth targeted.

K92 president Bryan Slusarchuk states, “The technical team onsite has done a great job getting production started on schedule and concurrently completing the PEA, which gives investors a clear growth path. The current discount to peer group valuation ought to appeal to deep value investors, while the growth rate targeted should appeal to investors seeking growth. With the project in great shape on the ground, we are now looking to expand the company’s profile as to make sure more and more investors follow us as the business plan is executed. While the project hosts high grade gold, many people are also starting to realize that Kora has a very strong copper component to it and that is also attracting attention given copper’s recent move.”

K92 is currently in the process of ramping up production towards steady state and also has two drill rigs onsite, one conducting grade control drilling, and one geared towards expansion and exploration drilling. The company has a strong group of institutional shareholders and trades in Canada under the symbol KNT (TSX.V), in the U.S. (KNTNF) and in Germany (92K).