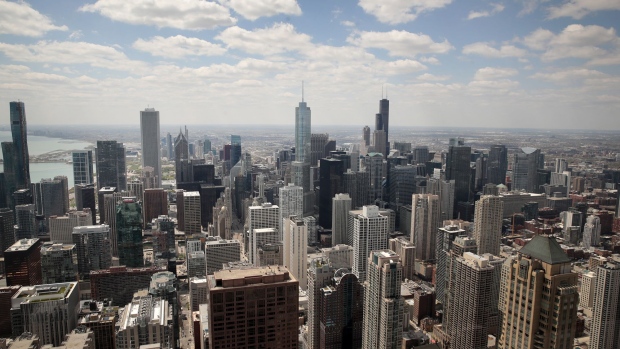 (Bloomberg) -- Chicago has suffered a series of corporate departures recently, but Ken Griffin leaving the city might sting the most.

The hedge fund billionaire said Thursday that he’s moving the home base of Citadel, the financial behemoth he founded in Chicago more than three decades ago, to Miami. Griffin hinted for months that he might make the move, citing the crime rate and political frustrations with leadership in Illinois.

The announcement comes less than two months after Boeing Co. said it plans to move its headquarters from the city to Arlington, Virginia, and Caterpillar Inc.’s decision to move its top corporate brass from the city’s suburbs to Dallas-Forth Worth area in Texas.

Chicago, long considered a global financial center, is home to the oldest futures exchange and operates all the nation’s option-contracts clearing. While the move by Boeing and Caterpillar certainly weren’t welcome, Citadel’s shift may burn a bit: The firm has grown to become a symbol of the city’s might in the financial industry.

“There’s no way to dress this up as anything but a punch in the gut for Chicago’s economic development reputation,” said Laurence Msall, president of the Civic Federation, a government watchdog group that counts Griffin among its trustees. “The entire company isn’t moving right away, but it is a terrible warning.”

The nation’s third-most populous city has seen a 34% rise in crime this year, with cases of thefts up 65%, according to year-to-date data on the Chicago Police Department’s website. Chicago’s Magnificent Mile and State Street shopping districts, along with many restaurants in the downtown Loop, have yet to fully recover from the pandemic. Even the National Football League’s Bears franchise is considering an exit to the suburbs.

Griffin, the richest man in the state with a net worth of more than $28 billion, has repeatedly voiced his concerns about the surge in crime throughout the pandemic in Chicago. He’s also regularly expressed frustrations with the operations and policies of the state under Democratic Governor J.B. Pritzker as well as voters’ lack of trust in government.

“Citadel leadership has been signaling for some time an enhanced presence in Florida, and while this announcement is not surprising, it is still disappointing,” Cesar Rodriguez, a spokesman for Mayor Lori Lightfoot, said in a statement. “We know Citadel will maintain a significant presence in Chicago and their story would not be possible without the great strengths of our city.”

Griffin contributed more than $50 million to successfully defeat a ballot measure in November 2020 that would have shifted Illinois’s tax structure from a flat rate to a graduated scale and increased levies on higher income. He’s put in about that much into the campaign for Richard Irvin, the mayor of the state’s second-largest city who hopes to win the Republican gubernatorial primary on Tuesday and make Pritzker a one-term governor in November.

The governor doesn’t see Citadel’s move as a blow to the city.  Kellogg Co. said Tuesday that it will split into three independent companies and that its snack unit will have corporate headquarters in Chicago.

“Countless companies are choosing Illinois as their home, as we continue to lead the nation in corporate relocations and had a record number of business start-ups in the past year,” Emily Bittner, Pritkzer’s spokeswoman, said in an email. “We will continue to welcome those businesses -- including Kellogg, which just this week announced it is moving its largest headquarters to Illinois -- and support emerging industries that are already creating good jobs and investing billions in Illinois, like data centers, electric vehicles and quantum computing.”