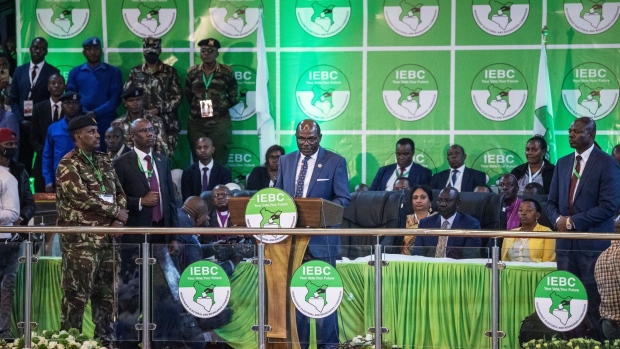 (Bloomberg) -- Four election officials who disputed the outcome of Kenya’s presidential vote wanted the results changed to ensure there was a re-run between frontrunners William Ruto and Raila Odinga, the electoral body’s chairman said.

They “demanded that the chairperson moderates the results for purpose of forcing an election re-run, contrary to their oath of office,” Wafula Chebukati, chairman of the Independent Electoral and Boundaries Commission said in a statement posted on the agency’s Twitter account. “The chairperson refused to yield to this unconstitutional and illegal demand and proceeded to declare the results of the presidential election as received from the polling stations.”

Chebukati declared Deputy President Ruto as the president-elect after announcing that he had garnered 50.5% of the valid votes cast, followed by former Prime Minister Odinga with 48.9%.

Irene Masit and Justus Nyang’aya, two of the four dissenting commissioners, said in separate text messages that they will respond to the allegation later, when contacted for comment on Wednesday. The commission is made up of seven members, including the chairperson.

Odinga on Tuesday rejected the results, saying a majority of commissioners did not agree with the final outcome, and that the chairman had unilaterally made the declaration.

The role of the national returning officer in a presidential poll “is not a shared responsibility and not subject to plenary decisions of the commission,” Chebukati said in the statement.

On the four commissioners’ allegation that the process was “opaque,” Chebukati said all the officials were involved in verifying and tallying the results. “They had access to all results beforehand and interchangeably announced them for six days in full glare of live television,” he said.

This month’s election has been largely peaceful, unlike in the past when violence erupted and scores of people were killed. Still, in one incident, one of the agency’s officials, Daniel Musyoka, was found dead on Monday after he went missing on Aug. 11. The commission urged security agencies to “speedily investigate and apprehend his killers.”