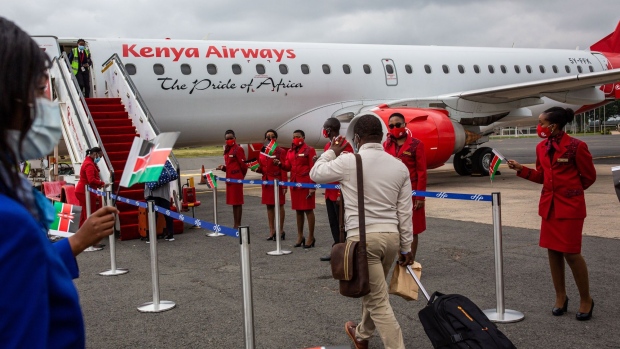 Crew members from Kenya Airways welcome a passenger onto an aircraft during a reopening ceremony at Jomo Kenyatta International Airport in Nairobi, on July 15. Photographer: Patrick Meinhardt/Bloomberg , Bloomberg

The Kenyan lawyers’ lobby faulted the process of the proposed restructuring of the nation’s aviation industry, in which the government seeks to take full control of Kenya Airways Plc.

The government’s plan to have units including the airline and the Kenya Airports Authority under a holding entity, could be delayed if lawmakers heed to the advice of the Law Society of Kenya and reject the National Aviation Management Bill. The LSK raised 12 issues including inconsistencies with an earlier private investment proposal, inefficiencies of government enterprises, labor concerns and a potential breach of the competition law.

The government had a target to conclude legislation on the plan this month.

The draft legislation has “significant legal issues,” LSK President Nelson Havi said in a statement published in the Daily Nation newspaper. “The bill should be withdrawn to enable necessary preceding processes.”

Kenya wants to seize control of the carrier it partially owns in a bid to develop Nairobi into an aviation hub to rival that of neighboring Ethiopia, a major transit point for passengers from Africa to Asia, Middle East and European destinations. The government plans to buy out Kenya Airways shareholder Air France-KLM, which owns a 7.76% stake, and a group of lenders who swapped their debt for equity as part of an earlier restructuring.

The proposal should be subjected to rigorous scrutiny by interested parties, according to Havi. The public had a five-days’ notice to present views, while the LSK was given less than 12 hours to appear before the lawmakers’ committee handling the matter.

Kenya Airways reported a loss of 21 billion shillings ($194 million) for the six months through June, up from 8.1 billion shillings a year earlier. The company expects demand for air travel for the rest of this year to be less than half the level in 2019, partly due to the ongoing effect of the Covid-19 pandemic.

The state’s Tourism Research Institute said arrivals at the nation’s airports in August, after the government lifted a ban on international passenger flights, were 14,049, compared with 165,494 a year ago.