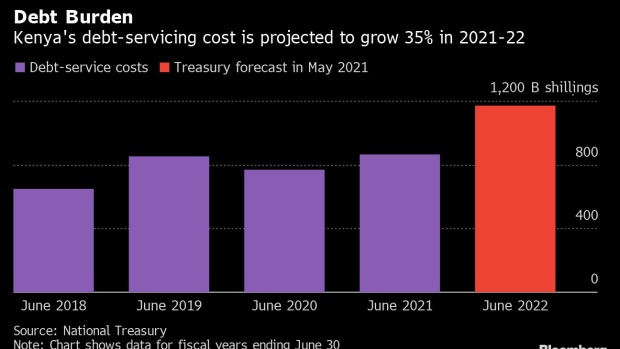 The government began 2021-22 remittances, with the first batch to the Export–Import Bank of China amounting to 82.7 billion shillings ($761 million), according to Kenya’s Controller of Budget Margaret Nyakang’o. Repayments are for debt taken for projects, including a railroad between Kenya’s capital, Nairobi, and the port city of Mombasa, Nyakang’o said in emailed responses to questions.

China postponed the repayments in January, helping the East African nation temporarily retain 27 billion shillings that was due for six months ending June 30. Renewing the payments comes as a blow to Kenya, which asked for an extension of the Debt Service Suspension Initiative -- under which the World Bank and International Monetary Fund urged the Group of 20 leading economies to help countries concentrate their resources on fighting the coronavirus pandemic.

Kenya’s debt-servicing costs are poised to surge 35% to a record 1.17 trillion shillings in the year through June 2022, according to the parliamentary budget office. That exceeds the administration’s 669 billion shillings budget for development projects during the period.

China, which accounts for about one third of Kenya’s 2021-22 external debt service costs, is the nation’s biggest foreign creditor after the World Bank. Kenya plans to spend a total of 117.7 billion shillings on Chinese debt in the period, of which about 24.7 billion shillings is in interest payments and almost 93 billion shillings in redemptions, according to budget documents.

The swelling debt burden -- with the budget deficit projected at 7.5% of gross domestic product this fiscal year -- partly reflects a pile of repayments deferred from the previous period by DSSI creditors, according the lawmakers’ budget office. The IMF estimates Kenya would receive total debt relief of $361 million from the DSSI in the six months through December, if the arrangement is extended. The reprieve for January through June was $350 million, nearly half the target of $680 million.

“Sovereign lenders have the choice of deciding whether or not to grant DSSI,” National Treasury Principal Secretary Julius Muia said. He confirmed that “Kenya has resumed servicing interest and principal” on Chinese debt.