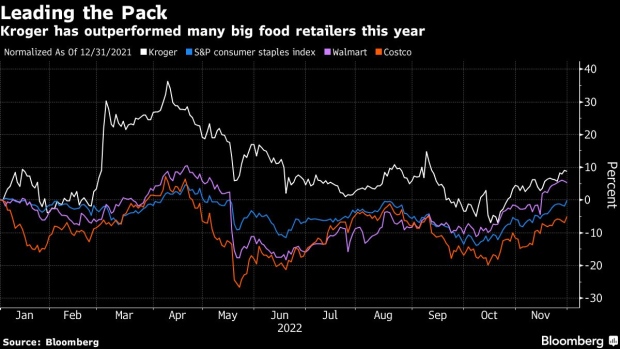 Signage is displayed on a shopping cart at a Kroger Co. supermarket in Louisville. , Photographer: Luke Sharrett/Bloomberg

(Bloomberg) -- Kroger Co. lifted its annual profit outlook for the year, but it wasn’t enough to thrill investors as Wall Street fretted about inflation’s toll on shoppers amid the grocer’s push to buy Albertsons Cos.

A moderate comparable-sales forecast for the current quarter suggests a slowdown after Kroger handily beat analyst estimates in the previous three-month period. That’s fueling worries that next year will bring the end of a long boom that was sparked by the pandemic as consumers prepared more meals at home.

“The last two and a half years have been as good as it gets, in our view,” Edward Kelly, an analyst at Wells Fargo & Co., said in a report. Kroger’s forecast shows how cash-strapped shoppers are likely to result in a sharp pullback in sales, he said.

Fears of a slowdown were also stoked by Costco Wholesale Corp.’s November sales numbers this week.

For Kroger, the next year is critical as it awaits the outcome of its proposal to buy Albertsons for $24.6 billion. The companies say the deal will help them lower prices and compete with Walmart Inc. and Amazon.com Inc. The transaction is likely to face a lengthy antitrust review and isn’t expected to close until early 2024.

Kroger slipped 1.3% to $48.56 at 3:39 p.m. in New York. The shares have outperformed so far this year with a 8.7% gain through Wednesday, while an S&P index of consumer-staples companies was little changed over that time.

Throughout the pandemic, Kroger has been getting a boost from persistent strength in food sales for home meals, even as prices rise for basic goods and Covid-19 restrictions are lifted.

Comparable sales excluding fuel will rise between 4% and 5% in the current quarter, which began in early November, Chief Financial Officer Gary Millerchip said on a conference call with analysts and investors. That’s after a 6.9% jump in the third quarter, which was more than two percentage points higher than analysts had expected.