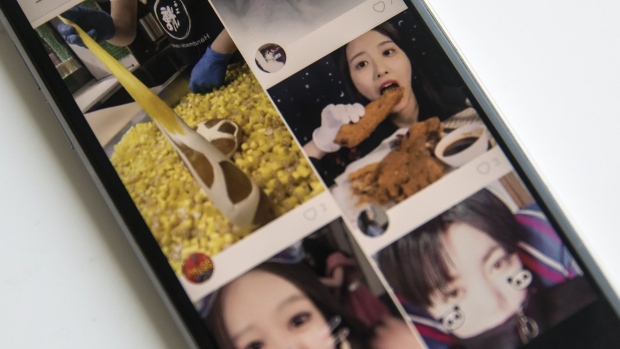 Beijing Kwai Technology Co.'s app Kuaishou, or Kwai, is arranged for a photograph on a smartphone in Hong Kong, China, on Tuesday, Jan. 16, 2018. Tencent-backed Chinese startup Kuaishou is seeking to raise funds at about a $17 billion valuation, people familiar with the matter said, as it expands its video-streaming service to Southeast Asia. Photographer: Qilai Shen/Bloomberg , Bloomberg

(Bloomberg) -- Kuaishou Technology, the main rival to ByteDance Ltd. in China, is seeking to raise as much as $5.4 billion in Hong Kong in what would be one of Asia’s biggest initial public offerings this year.

The short video startup, backed by Tencent Holdings Ltd., is selling 365 million shares at HK$105 to HK$115 each, according to terms of the deal obtained by Bloomberg News. The company will start taking investor orders from Monday through Jan. 29 and is slated to list on Feb. 5.

Kuaishou has attracted 10 cornerstone investors for its offering, who agreed to subscribe for $2.45 billion of stock, based on mid-point of the marketed range. The lineup includes BlackRock Inc. and Abu Dhabi Investment Authority, the terms show, confirming an earlier Bloomberg News report. Cornerstone buyers typically agree to hold stock for a set period of time in exchange for early, guaranteed allocation.