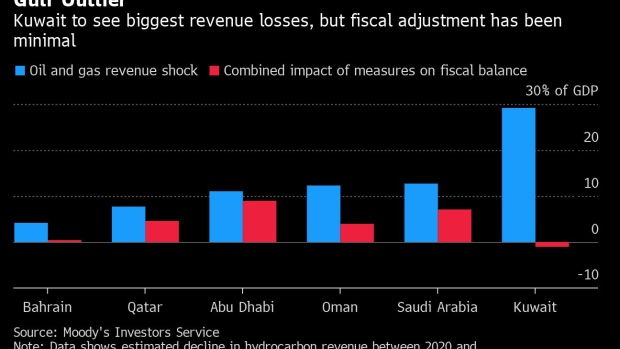 Kuwait, one of the world’s wealthiest countries, is in a budget crunch so severe that it may have to soon begin leaning on a fund intended to prepare it for a future without oil.

Running a deficit that could reach 40% of its economy this year, and unable to borrow due to a showdown between the government and parliament, Kuwait is running out of options. The General Reserve Fund, essentially its Treasury, has been tapped so aggressively that its liquid assets could come close to being depleted within the current fiscal year, or by April 2021.

That has attention turning to its Future Generations Fund, the world’s oldest sovereign wealth fund and estimated to be the fourth-largest globally. As its name implies, the savings vehicle is meant to secure the wellbeing of future generations of Kuwaitis, who probably won’t be able to rely on oil to sustain one of the world’s most prosperous populations.

One measure being discussed is halting a mandatory annual transfer of 10% of total revenue to the FGF in years when the government runs a deficit. An amendment to the existing law may also allow to transfer as much as 25% in years of surplus. Another option is taking a loan from the FGF, which would be repaid, or for the fund to buy 2.2 billion dinars ($7.2 billion) of assets owned by the Treasury, in order to boost liquidity.

Officials at the Kuwait Investment Authority, which oversees the funds, couldn’t be reached for comment. Finance Ministry officials didn’t immediately respond to a request for comment.

“You’re talking about a country where you have oil wealth and a sovereign fund and an educated population, you have so many things going for you,” said Abdulmajeed Al-Shatti, a Kuwait-based economic consultant who was previously chairman of the Kuwait Banking Association. “Unfortunately, we have a mismanagement of fiscal policies and a lot of unnecessary subsidies.”

The government has tried over the years to reduce wasteful spending, but as economic damage from the pandemic and low oil prices spread across the Gulf, Kuwait mustered one of the smallest fiscal adjustments among its neighbors. Ministries have been asked to lower their budgets for the current fiscal year by at least 20%.

And even when the government has made decisions -- such as offering support for private-sector allowances -- most haven’t yet been implemented. In the meantime, companies are going bankrupt and there’s no new law governing employers’ relationship with workers, who still can’t be furloughed.

The state is calling in dues and scrounging up cash where it can. In April, the Finance Ministry asked state-owned Kuwait Petroleum Corp. to transfer 7 billion dinars in dividends owed to the Treasury. Parliament’s finance committee last month also asked the KIA for its view on halting the 10% payment as well as transferring the FGF’s annual profits into general reserves, according to a copy of the document seen by Bloomberg.

Some of the crisis is self-imposed, with lawmakers resisting efforts by the government to borrow, saying it should stop mismanaging public finances before going out to markets again. Kuwait has one of the highest credit ratings in the Middle East, and its neighbors Abu Dhabi, Qatar and Saudi Arabia sold a combined $24 billion in Eurobonds in April alone, with demand for Saudi Arabia’s $7 billion sale topping $50 billion.

Lawmakers are rejecting attempts to cut citizens’ salaries and subsidies though, which account for more than 70% of spending. While the government would need legislative authorization to enable it to sell debt or to withdraw from the FGF, authorities require no approval for the fund to extend a loan or make an investment in another part of the government.

Rather than make a deal with lawmakers, the government may choose to wait until parliament’s legislative term ends and then issue an urgent decree to plug the budget gap, according to Abdulwahab Al-Easa, a Kuwaiti political commentator. He said deeper reforms would be probably off the table for now, given an upcoming parliamentary vote.

“Any economic reform in an election year will definitely be very hard,” Al-Easa said. “The government has a lack of marketing tools to convince people of economic reform.”