Canada’s labour market is showing clear signs of healing as lockdowns begin to lift in an economy awash in money from government support programs.

A Bloomberg News poll taken at the end of May found that 30 per cent of respondents who had lost their job or seen hours decline because of the coronavirus pandemic said they were re-employed or working more.

The survey, conducted by Nanos Research, is consistent with other high-frequency data from Indeed Canada and Google that suggest a stabilization in labour conditions and economic activity over the past few weeks.

Any recovery would be a reassuring development for a country that’s experienced a historic employment crash, with more than one quarter of workers either losing their jobs or recording a substantial reduction in hours worked.

Still, given the massive drop in employment, some type of rebound was inevitable and it remains too early to declare a substantial comeback.

“Research suggests that the initial shock of job loss and fewer working hours is wearing off as some Canadians’ job prospects start to brighten,” said Nik Nanos, chief data scientist at Nanos Research. “It is too early to tell whether this trajectory will continue to a recovery or flatten into a new more depressed jobs normal.”

To be sure, the recent pick-up in activity may have been too late in the month to be captured by Statistics Canada’s latest labour force reading, which is due Friday. 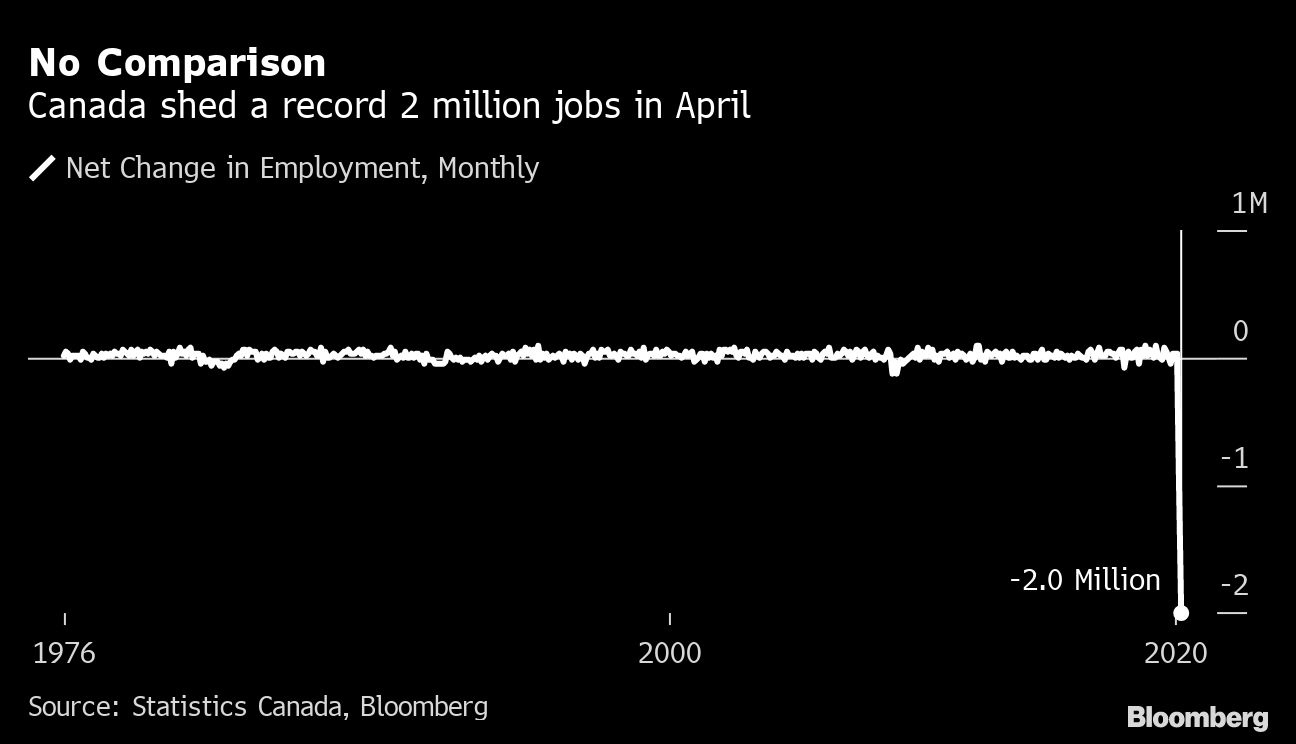 The Statscan survey, conducted between May 10 and May 16, coincided with the restart of Quebec’s construction industry but took place before the phased opening plan in Ontario, according to a report by Dominique Lapointe, an economist at Laurentian Bank Securities in Montreal.

Economists anticipate the Statscan numbers will show continued damage, with an additional 500,000 jobs lost during the month, according to the median estimate of a Bloomberg survey.

That will add to a decline in employment of 1 million in March and a loss of 2 million in April.

Another 2.5 million Canadians are reporting working less than half their usual hours for reasons related to Covid-19, according to the statistics agency.

The Nanos poll, which was taken May 26 to May 28, found that 25 per cent of respondents had lost jobs or saw hours reduced at one point since the start of the pandemic.

Of those, about three in ten have since been rehired or are working more hours.

In the survey, 41 per cent said their employment or hours weren’t affected at all by the coronavirus.

About one third said they were retired or not in the labour force before the crisis hit.

New Canadian postings on Indeed.com started to increase at the end of last month, and though still well below last year’s levels, the trend is positive, according to Brendon Bernard, an economist at the job-listing site.

Postings are “starting to creep up” with construction, retail, information technology and food preparation listings all showing signs of recovery. “It does suggest that hiring appetite has stabilized to a degree,” Bernard said.

The rebound story is also being reinforced by Canadians’ movement patterns.

Mobility data from Apple and Google smartphones during the latter half of May suggest more people present in retail stores and parks -- coinciding with reopenings across Canada. While transit usage remains down, driving and walking have picked up, a positive sign for commerce.

Even with emergent signs of recovery, Canada’s labour market has a long way back to pre-crisis levels. Economists surveyed by Bloomberg expect Canada’s unemployment rate will tick up to 15 per cent in May, a modern-day record.

Regionally, the survey shows some 42 per cent of respondents in Quebec who had lost work or hours had regained employment. The rebound in hard-hit Alberta, which is also coping with falling energy prices, was more muted.

The Nanos poll was a hybrid phone and online random survey of 1,009 Canadians, with a margin of error of 3.1 percentage points.