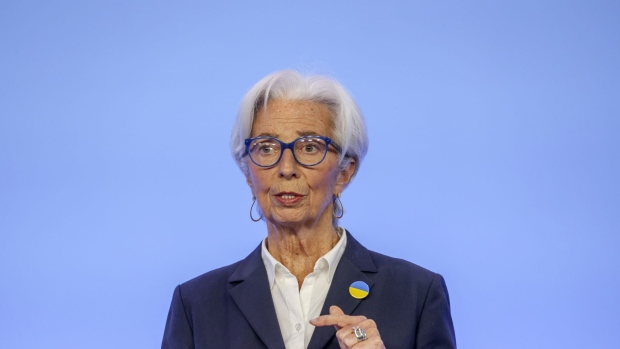 Christine Lagarde, president of the European Central Bank (ECB), speaks during a news conference in Frankfurt, Germany, on Thursday, March 10, 2022. The ECB unexpectedly accelerated its wind-down of monetary stimulus, signaling it's more concerned about record inflation than weaker economic growth as Russia’s invasion of Ukraine threatens to propel prices even higher. , Bloomberg

(Bloomberg) -- European Central Bank President Christine Lagarde said crypto-currencies are “based on nothing” and should be regulated to steer people away from speculating on them with their life savings.

Lagarde told Dutch television that she’s concerned about people “who have no understanding of the risks, who will lose it all and who will be terribly disappointed, which is why I believe that that should be regulated.”

The comments come amid choppy times for crypto markets, with digital currencies Bitcoin and Ether down 50% from last year’s peak. At the same time, the asset class is facing tougher scrutiny from regulators worried about the dangers it may pose to the broader financial system.

Lagarde said she’s skeptical of crypto’s value, contrasting it with the ECB’s digital euro -- a project that may come to fruition in the next four years.

“My very humble assessment is that it is worth nothing, it is based on nothing, there is no underlying asset to act as an anchor of safety,” she said.

“The day when we have the central bank digital currency out, any digital euro, I will guarantee -- so the central bank will behind it and I think it’s vastly different than many of those things,” Lagarde said.

Other ECB officials have already voiced concerns. One is Executive Board member Fabio Panetta, who said in April that crypto-assets “are creating a new Wild West,” and drew parallels with the 2008 subprime mortgage crisis.

Lagarde said she doesn’t hold any crypto assets herself because “I want to practice what I preach.” But she follows them “very carefully” as one of her sons invested -- against her advice. “He’s a free man,” she said.