The most stable longer-term driver of the Canadian-U.S. Dollar exchange rate is the interest rate differential between short-term bond yields. Active capital looking for return moves from currency to currency seeking the highest yield possible. The green line on our chart is the spread between Canada’s two-year bond (0.67 per cent) and the U.S. two-year bond (1.29 per cent). "Fast money" has been leaving Canada and going into the U.S. since they have more attractive short-term rates. This usually happens until the point when the risk in owning the currency is too high and that fast-money capital flees.

One of the biggest catalysts to move the exchange rate is Canada’s single biggest export to the US: Crude oil (the pink line) and related energy products. 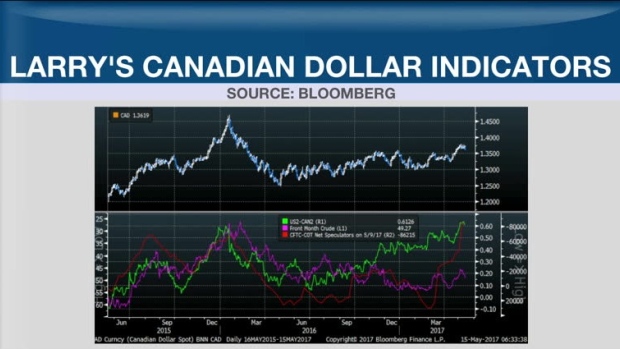 Over the weekend, it appears that Russia and Saudi Arabia had a meeting of the minds and want oil prices higher. They will agree to keep production levels at current output through the first quarter of 2018. Of course, if demand does not increase it will not mean much and if the U.S. and other non-compliant OPEC members like Libya and Nigeria pick up the slack it will likely serve to put a floor under crude, but does not suggest we will see balance and a move towards US$60 that OPEC hopes for.

Going into the inventory draw period typically seen in the summer months, the near-term bottom for crude is probably in. Energy is the biggest overweight sector we have right now. 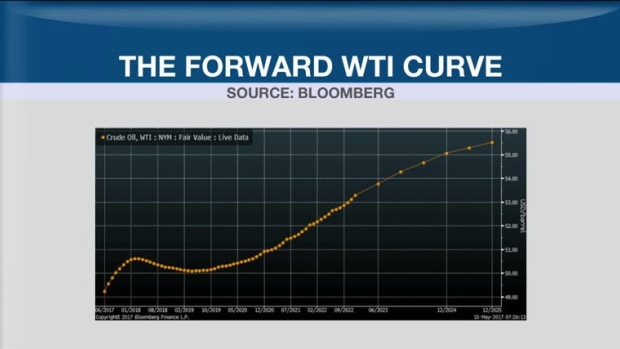 The forward WTI curve suggests that U.S. supply is likely to remain ample through 2020 and depletion does not become a factor until well into the next decade. For now, the oil price influence on the Canadian dollar probably means we are range bound in the 70-80 cent range for the next few years.

Finally, take look at the speculative position in the futures markets (the red line).

The Commodity Futures Trading Commission (CFTC) report the Commitment of Traders (COT) data each week. When you trade in commodity futures like currencies, you are classified as a large or small speculator if you are not a commercial dealer like a bank. The large speculators tend to be most long at the top and most short at the bottom. As you can see, as of last week, the large speculators are the most net-short the Canadian dollar as they were when it was 67 cents (US$1.47) as WTI hit the US$26 level in January 2016.

The combination of these three indicators along with the commitment from Russia and Saudi Arabia likely put in a floor for the Candian dollar. In June, we see the FOMC raising rates again and that would have some limiting near term move back to 75 cents.

I’m now fully hedged from a trading perspective, but would look to add U.S. currency later in the year if we move above 75 cents again. I doubt we see 80 cents this year with the Fed looking to raise rates at least twice more, and the potential for non-OPEC members to continue to pump.