What are the most important considerations when investing globally?

We get many questions on foreign currency hedging. When investing globally in developed markets, currency is often the most important consideration in the difference in returns. With the French election uncertainty mostly behind us and most strategists suggesting Europe is getting stronger, what is the best way to play it?

Our first chart shows the total return of 4 ETFs. VGK is the Vanguard FTSE Europe ETF price in USD and has full exposure to the euro currency. The White line has had about a 44 per cent total return since 2010. The yellow line is that same ETF priced in euro currency. It’s had an 89 per cent return. That’s a massive difference. The redline is the loss of value in the euro over that period expressed by the FXE currency shares euro trust ETF, at about 26 per cent. The orange line is the WisdomTree Currency hedged Europe fund. This was the first way to buy a Europe only ETF fund with a currency hedge. Compared to the yellow line, the returns were similar. Both indexes have slightly different country weights. So you can see that hedging or not hedging the currency was the biggest factor in returns.

In the long run, currency returns are the biggest differentiator in portfolio returns when investing in global developed markets. This would apply for the British pound, Swiss Franc and the Japanese Yen as well as a few others free floating currencies. It does not apply as much for emerging markets, but it is still an important factor. When we look at a long-term chart of returns between Germany and the US, we can see that currency is the biggest factor. Our chart shows the difference in returns since 1975. When we do the attribution analysis, currency explained 70% of the periodic difference in returns. The stronger or weaker foreign currency drives most of the difference in returns. When we look at Canada vs. the U.S., it’s about 50 per cent of the difference in returns. In Canada, when energy and commodities are leading like last year, the TSX outperforms significantly. Sector considerations are the second most important factor. Actually, security selection (individual stocks) are the least important. 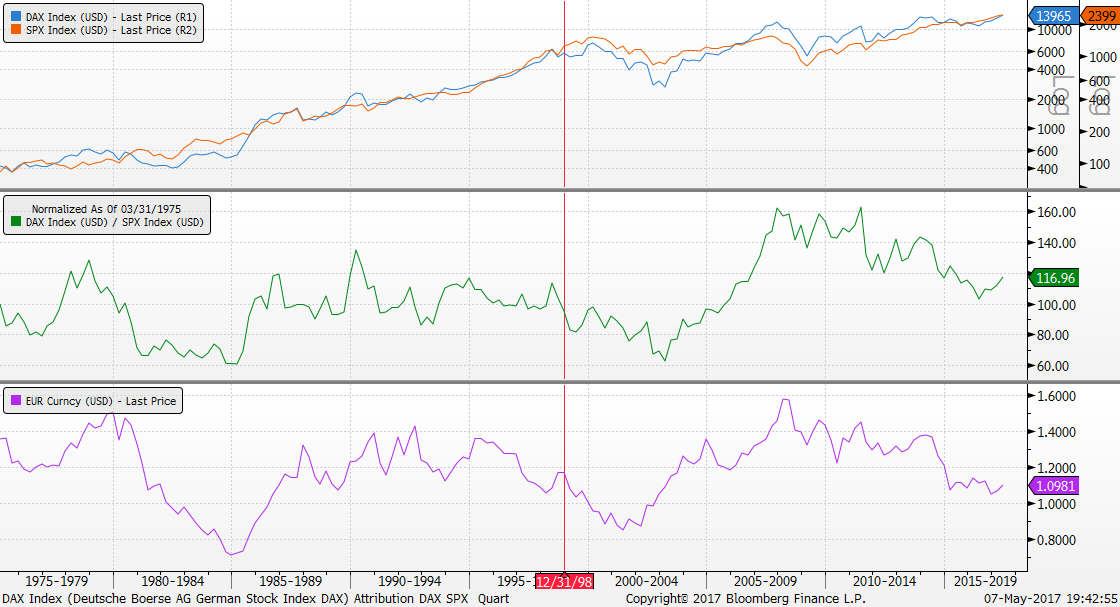 The last chart we are looking at this week is the HEDJ ETF that shows the return of the ETF in blue with the net money flow in and out in red. Now that Europe is breaking to new highs, investors are starting to jump back in. They were selling aggressively in 2016 when they should have been buying. We would caution against jumping in to the excitement here, but if you do, I would look to hedge the currency exposure. Don’t think that Europe is fixed now that the French election has passed. We are confident that the EU breaks apart in the coming years and the euro is likely to remain weak. It will likely be a significant part of your total return. In the long run, a euro below 1 versus the U.S. dollar is attractive, until we get there favour the currency hedged ETFs. My favourite way to play it the past few years remains the ZWE (BMO high dividend covered call) ETF that has a currency hedge and yield over 6%. Compared to HEDJ, it has more than double the yield and only 70 per cent of the risk. 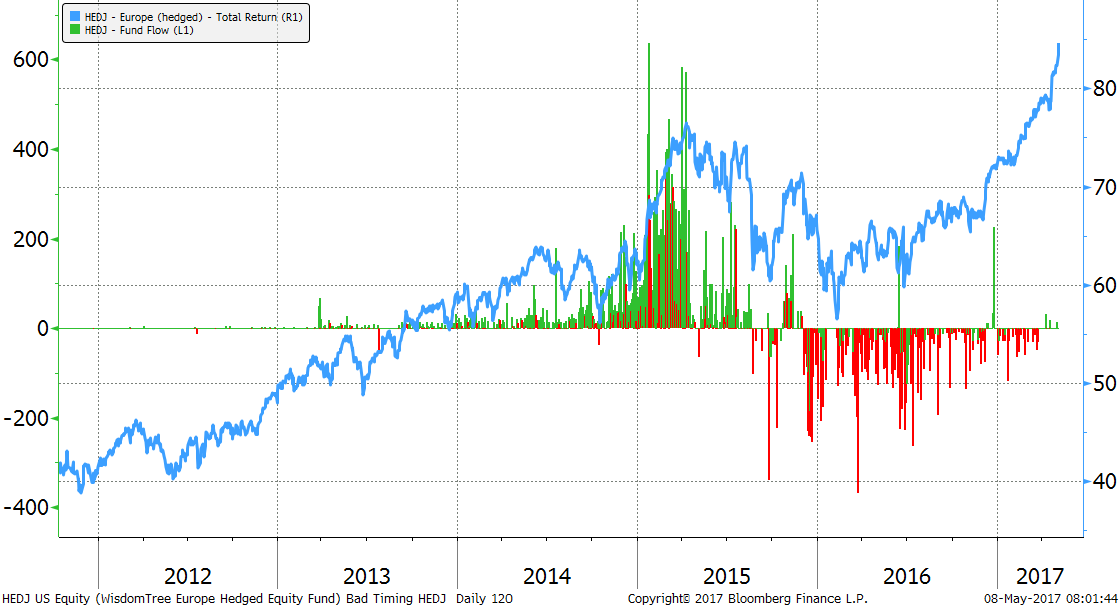