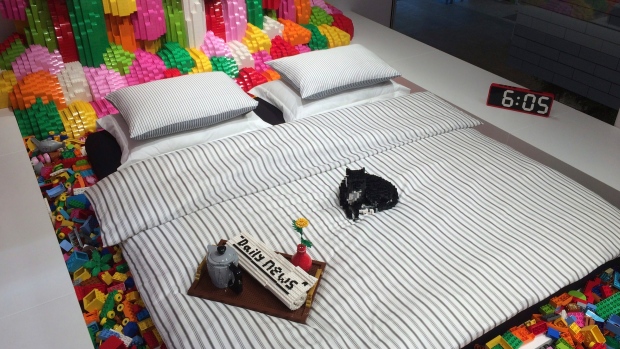 The adult's bedroom with cat and newspaper all made of Lego bricks inside the new Lego sleepover house teamed up with Airbnb, in Billund, Denmark, in this photo dated Sept. 8, 2017. , The Canadian Press

BILLUND, Denmark -- Lego is having a sleepover at its newly-opened Lego House in Denmark.

The Danish toy company has teamed up with Airbnb to allow one family to stay the night at its new attraction -- a 12,000 square-metre building filled with 25 million colorful plastic bricks.

There's a parents' bedroom that features a Lego cat, slippers, a coffee pot, and even a newspaper made from the bricks. In the children's bedroom there's a Lego teddy bear, lamp and story book. Towering above the child's bed is a six-metre tall Lego brick waterfall, surrounded by a seemingly bottomless pool of -- you guessed it -- Lego bricks.

"What I do as a as a job is I actually make the products that you can buy at the toy stores," says Lego design manager Jamie Berard. "So, to do something like this outrageous waterfall or to recreate a bedroom out of what is currently not really a living space is a wonderful challenge."

The promotional effort comes as the company tries to revive its sales, which are falling for the first time in 13 years. Lego said in September it was cutting 1,400 jobs, or eight per cent of its workforce. 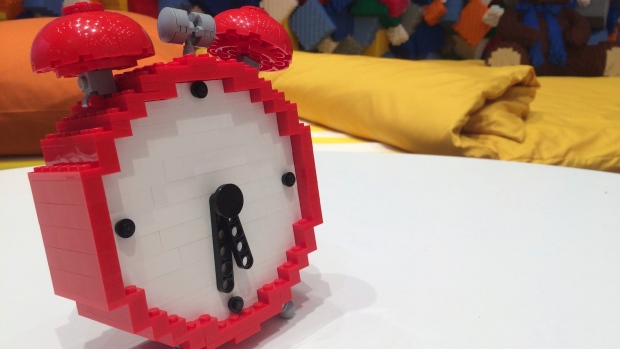 Those who want to join Lego's private sleepover must enter a competition and describe what they would build if they had an infinite supply of Lego bricks. The winner will get the chance to create their entry under expert supervision, as part of their stay.

Designed by Danish architect Bjarke Ingels, Lego House opened in late September after four years' building work. The attraction is located in central Billund, a small town in Danish Jutland where the toy company is headquartered.

Towering at the building's centre is a 15-metre tall Lego brick tree, named the "Tree of Creativity," which took over 24,000 working hours to construct. Made from over six million bricks, it charts the gradual evolution of the toy company's creations.

The competition launches Thursday and is set to run till mid-November. The winner's family will visit Lego House on Nov. 24.

This isn't Airbnb's first sleepover contest -- last year, it invited people to spend a night next to the shark tank at Paris Aquarium and at "Dracula's castle" in Romania. It was the first time Bran Castle welcomed overnight guests since 1948.

The Lego experience is rather tame by comparison, unless barefoot visitors should unwittingly step on a stray Lego brick. Adults are advised to wear Lego-proof slippers just to be safe.

"I wish I was the one that could just sleep in here," says seven-year-old Albert Landbo, who was visiting with his brother Gustav and their parents. Asked what creation he proposed for the competition, he said: "I think I would make a little baby husky."