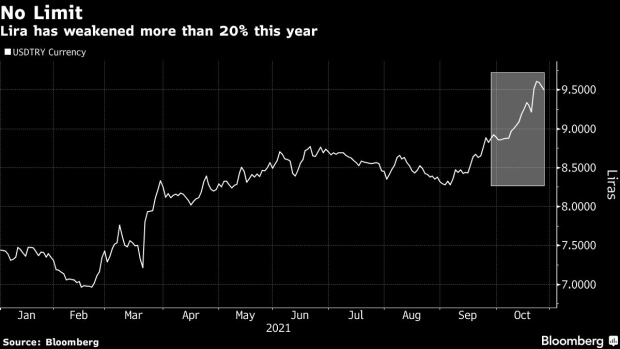 The lira’s most bearish forecaster just set an even weaker target as Turkey’s currency looks set to blow through the “symbolic” level it warned of back in March.

Commerzbank AG now sees the lira reaching 11 per dollar as it approaches the round 10 it called when President Recep Tayyip Erdogan ousted his central bank governor in March. Just before that, the lira was outperforming all 24 emerging market currencies tracked by Bloomberg and most analysts expected it to snap eight years of losses.

The central bank started cutting interest rates in September, setting off an inflationary currency spiral. The lira is now the worst-performing among its peers, and options traders see a 63% probability of it reaching 10 versus the dollar by the end of the year.

“Only a couple of months ago this level seemed to be unrealistic,” said Ulrich Leuchtmann, head of currency strategy at Commerzbank in Frankfurt. “We wanted to remind our clients of the scale of risk.”

On Wednesday, Tatha Ghose, a senior emerging-market economist at Commerzbank in London, revised the lender’s projection to 11 versus the dollar by March 2022. Wells Fargo sees it reaching that level by the end of next year.

“Under an inconsistent monetary policy and inflation-targeting framework, the exchange rate can depreciate without bound,” Ghose wrote in a note. “Further rate cuts appear very likely to be on the cards, because the cuts are not driven by any fundamental considerations.”

Erdogan has also unsettled markets politically, though he pulled back from a full-blown diplomatic spat with the West this week.

“Every day without bad news is good news and the lira weakness will not continue at infinite speed,” Leuchtmann said. “However, that doesn’t solve the problem of non-sustainable monetary policy and inflation dynamics.”

There are many possibilities for the lira in the short run, but “the medium-term direction is clear,” he said.

“It’s very hard for markets to price in lingering political risks when you have no idea if or when they might materialize,” Stadtmiller said. “Markets forget about these risks once the headlines die down, only for them to end up being front-page news at some point in the future.”