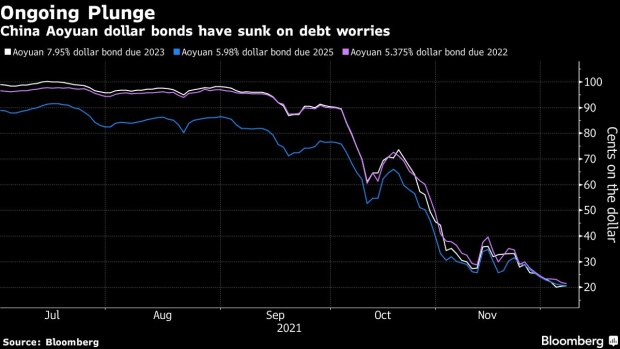 (Bloomberg) -- The list of Chinese developers warning they may be unable to meet upcoming financial obligations now includes China Aoyuan Group Ltd., another builder from the southern Guangdong province to run into difficulties.

The company said last week there’s no guarantee it will be able to meet certain commitments due to liquidity issues. Fellow Guangdong-based developer China Evergrande Group used nearly the exact language a day later when announcing plans to work on an offshore-debt restructuring plan. Credit assessors have repeatedly slashed their views on Aoyuan of late, with Fitch Ratings saying Tuesday that “a default or default-like process has begun.”

Aoyuan’s offshore bonds started slumping in September, with some plunging from near face value to 20 cents on the dollar, according to Bloomberg-compiled prices. The company’s notes are among the worst-performing in China’s high-yield dollar market this year. Meanwhile, its shares have slumped 75% in 2021, hitting their lowest level in a half-decade.

Founded 25 years ago in Guangzhou, Aoyuan has been listed in Hong Kong since 2007. The company focuses on the Greater Bay Area, according to its website, a region that includes Macau and Hong Kong. Aoyuan is China’s 35th-largest developer by contracted sales, according to China Real Estate Information Corp.

The builder has $4.3 billion of outstanding bonds, three-quarters of it being dollar debt, according to Bloomberg-compiled data. Aoyuan has two dollar notes maturing in January, with combined principal of $688 million.

Aoyuan said last week that a string of credit-ratings downgrades against the company, part of a record number for Chinese developers, triggered creditors to demand repayment of about $651.2 million. Both sides are discussing next steps, the company said.

Debtwire and REDD in November reported on missed payments, with a mainland publication saying it had been told by Aoyuan that the developer was working with a creditor. The builder recently won approval to extend repayment on three yuan-denominated asset-backed securities, including a 150 million yuan ($23.6 million) one originally due Dec. 3.

Why does it matter?

Many developers have warned of potential debt-repayment difficulties, including big dollar-bond issuers Evergrande and Kaisa Group Holdings Ltd. Some analysts have said the sector could face a string of defaults, which hit record levels in 2021 in the wake of an effort to curb the industry’s leverage-fueled growth. A surge in junk dollar bond yields to all-time highs has limited the ability of lower-rated firms to raise funds in the offshore market, adding to the squeeze of slowing home sales and regulatory restrictions.

What does the company say?

Aoyuan said in the Dec. 2 stock exchange filing that not meeting the more than $650 million of repayment demands could trigger accelerated repayments on other offshore debt. Inability to comply or reach a deal with creditors may cause “a material adverse effect on the group’s business, prospects, financial condition and operating results.”

The company did not immediately respond to Bloomberg requests for comment Tuesday.

What do rating agencies say?

The three major international assessors have downgraded Aoyuan a combined nine times since Oct. 15 due to debt-repayment risks. S&P Global Ratings on Monday dropped the company to selective default and then withdrew its ratings at the firm’s request, citing Aoyuan’s nonpayment disclosure and its “highly uncertain” prospects for meeting upcoming maturities.

What are traders watching for next?

How Aoyuan’s debt-extension talks with creditors fare will be crucial. If an agreement can’t be reached, the company might run into trouble even before January’s two dollar bonds mature. It could propose to extend those notes through a debt swap, a strategy that some developers have pursued to mixed effect.

Aoyuan said two weeks ago it hired financial and legal advisers to assess its capital structure.