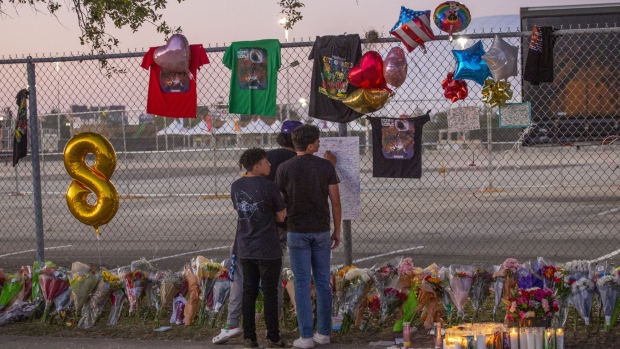 A memorial at Astroworld Festival in Houston is seen. , Bloomberg

Live Nation Entertainment Inc.’s legal exposure from the deadly crush of concertgoers at the Astroworld Festival in Houston last week is surging, with at least 40 lawsuits pending as of Tuesday against the promoter and U.S. rapper Travis Scott.

Canadian rapper and singer Drake was also named in some of the suits. He appeared onstage with Scott part of the time that the tragedy unfolded Nov. 5 at NRG Park, causing eight deaths and hundreds of injuries.

The death toll could rise. On Tuesday night, local news media reported that Bharti Shahani, a 22-year-old Texas A&M University senior, was declared brain dead following her injuries at the concert; a 9-year-old boy is also reportedly fighting for his life in medically induced coma.

One such lawsuit, filed Monday by Austin resident Kristian Paredes, who was injured at the event, said the performers “were negligent for inciting a riot and violence” and the company failed to prepare for a performer with a history of encouraging public disorder.

Injuries suffered by Paredes will last “for a long time into the future, if not for his entire life,” according to the suit.

Houston Mayor Sylvester Turner on Tuesday said the city had released all permits related to Astroworld “in the interest of transparency.” The permits were filed with the mayor’s special-events office as well as Houston’s health department and fire department.

“Occupancy Permits are not issued for events that are held entirely outdoors, as was the case with Astroworld Fest,” the mayor’s office said.

Live Nation has said it’s cooperating with Houston’s ongoing investigation into the incident.