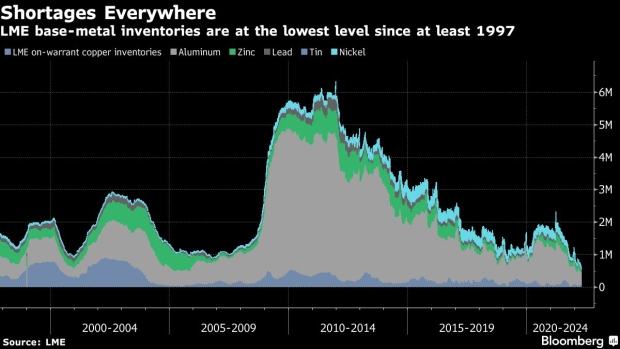 Traders, brokers and clerks on the trading floor of the open outcry pit at the London Metal Exchange Ltd. (LME) in London, U.K., on Monday, Feb. 28, 2022. The turmoil unleashed in commodity markets by Russia's invasion of Ukraine worsened on Monday as LNG orders were paused, finance for trade in raw materials dried up and Black Sea wheat sales froze. , Bloomberg

(Bloomberg) -- London’s metal traders are still reeling from the historic squeeze in nickel a month ago, but they may not get much time to recover -- inventories across the exchange’s warehouse have dropped to perilously low levels, raising the threat of further spikes in everything from aluminum to zinc.

The available stockpiles across the six main contracts on the London Metal Exchange have plunged to the lowest on record in data going back to 1997. Goldman Sachs Group Inc. warned that copper is “sleepwalking towards a stockout,” while freely available zinc inventories shrank by more than 60% in less than three weeks as Trafigura Group booked out large volumes. Nickel itself remains at risk of further turmoil.

“It seems as though we’re facing a new squeeze every week on the LME at the moment,” Michael Widmer, head of metals research at Bank of America Corp., said by phone from London.

Inventories were already dropping as industrial activity roared back last year while global logistics and shipping systems remained snarled. Metals like aluminum and zinc came under pressure in Europe as surging power prices made some plants unprofitable, leading to closures. More recently, supplies from Russia’s giant metal producers have become less desirable and harder to ship following the country’s invasion of Ukraine.

Low exchange stocks make the market more vulnerable to short squeezes. In physically settled contracts, like the LME’s historically have been, every short seller who holds their position until the contract’s expiry must deliver physical metal. In the LME’s case, that physical metal must be in the form of a registered parcel in an LME warehouse.

When LME stocks are low, there’s less registered metal available for those with short positions to deliver, and so they must either bring new metal into LME warehouses or -- if metal in the world at large is also in short supply -- cover their position by buying back LME contracts. That rush to buy is characteristic of a short squeeze.

While the LME has recently removed the requirement for short position holders to deliver metal, the penalty for not delivering -- 1% of the value of the contract per day -- is steep.

Read: What Happens If the World’s Key Metal Exchange Has No Metal?

The shrinking stockpiles add to a growing list of headaches for the LME and its users. The exchange faces fierce criticism for its handling of the nickel short squeeze, when it suspended the market after a 250% price spike and canceled billions of dollars of trades. U.K. regulators this week launched a review into the LME. Meanwhile, open interest has dropped across the market as investors and traders cut their exposure, leaving metals exposed to erratic price moves as liquidity shrivels.

In the zinc market, Trafigura is withdrawing significant volumes of metal to make up for a shortfall in its own supplies after production cuts in Europe, people familiar with the matter said. Orders to withdraw zinc from LME warehouses have jumped by more than 45,000 tons since the end of March, drawing available stocks of the metal down to the lowest in more than a year.

The LME said it has noted the current tightness in zinc. The exchange is “monitoring all metals closely to ensure market activity remains orderly,” it said in a statement.

The sharp drop in zinc inventories echoes a similar drawdown in copper last year, when available stocks dropped to the lowest since 1974, sparking a chaotic supply squeeze.

The LME has made sweeping adjustments to its rules in recent weeks, in part to address the risk of running out of inventories, including introducing the rule that allows holders of short positions to avoid delivery.

Following the nickel squeeze, it imposed a 15% limit on how much the price of its metals can move in a single day. And it is requiring greater transparency of off-exchange positions between banks and brokers and their clients in the “over-the-counter” market.

Those measures could slow the pace of further rallies, but many analysts still see prices marching quickly higher as the shortages on the LME and the wider physical markets deepen.

Copper -- which is already trading near an all-time high -- will also be vulnerable to further spikes as inventories decline, Goldman said on Thursday.

“Copper is sleepwalking towards a stockout,” analysts led by Nicholas Snowdon said in an emailed note, referring to the risk that inventories will be depleted entirely. “We believe higher prices are an inevitability -- required to stimulate substantially more scrap supply as well as accelerate demand destruction to balance this market.”