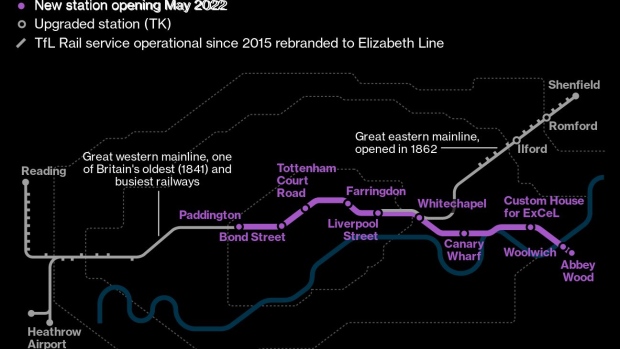 (Bloomberg) -- Would-be homeowners looking for properties along London’s new Elizabeth Line railway still have time to get into the market before an inevitable uptick in house prices, research shows.

Just a third of Elizabeth Line stations have seen nearby properties notably increase in value by more than the local housing market since construction of the line began in 2009, real estate broker Savills Plc said. The long-awaited £18.9 billion ($23.8 billion) Crossrail project, which opened today, will cut journey times between the east and west of the city and allow passengers to travel further afield without changing trains.

“There is still plenty of opportunity for buyers to invest along the line,” said Lawrence Bowles, director of research at Savills. “We expect uplifts to come into effect once the line finally opens and the connectivity becomes a reality.”

Rail projects historically prompted a rise in residential values around new stations, outperforming the wider markets, Savills said . But that’s yet to materialize near at least 18 of 31 stations along the Elizabeth Line, leaving the door open for investors to capitalize.

Neighborhoods near Crossrail’s east London stations, where the housing stock includes relatively high numbers of flats, have grown 0.3% slower than the surrounding area every year since construction began. In west London, areas within 500 meters of the line’s stops have performed in line with the wider district, Savills said.

A previous extension to the Jubilee Tube line, stretching from Westminster to Stratford, drove 7.3% annual growth in prices in the local areas close to new stations in the five years after its opening in 1999, Savills said. Similarly, in the five years after the North London Line was upgraded to become an official part of the London Underground network, properties close to those stations saw an average uplift of 5.7%.

Savills said this price boom is likely to be replicated in more areas near the Elizabeth Line. “Once full service starts on the line and connectivity steps up, we expect to see a Crossrail premium emerge,” Bowles added.