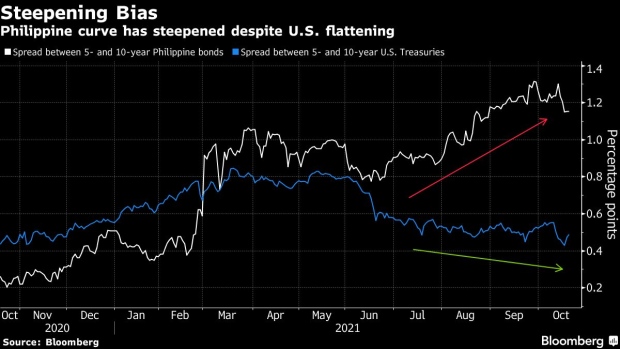 Shoppers buy meat from road side stalls in a community market in Mandaluyong City, Metro Manila, the Philippines, on Aug. 6, 2021. The Philippines capital region is under a strict lockdown called enhanced community quarantine, most businesses are shut and only essential shops like supermarkets and pharmacies can fully operate. Photographer: Veejay Villafranca/Bloomberg , Bloomberg

(Bloomberg) -- Most Southeast Asian yield curves have flattened in recent months in tandem with a similar move in U.S. Treasuries. The Philippines is an outlier.

The spread between five-year and 10-year peso bond yields is near the widest in over a year, with long-dated securities hit by fears about rising supply as the Philippines’ fiscal deficit widens. There’s little indication the gap will shrink as central bank policy anchors the short end of the curve while elevated inflation weighs on longer maturities.

The steeper curve could make it costlier for Treasurer Rosalia de Leon to finance the Philippines’ budget shortfall, which is officially expected to clock in at a record 9.3% of gross domestic product this year. Coming at a time when yield curves in Thailand and Malaysia are flattening, the steepening risks making longer-dated peso securities Southeast Asia’s laggards.

The spread between five-year and 10-year Philippine bonds stands at 115 basis points. It reached 132 basis points in late September, the widest in over a year.

In contrast, the Malaysian and Thai yield curves have narrowed by 24 basis points and 16 basis points, respectively, since early June as they mirrored a similar move in Treasuries.

This indicates the Philippine yield curve is unlikely to track a further flattening in its U.S. counterpart, which may result in long-dated peso notes underperforming their regional peers. Swap traders expect the spread on 5- and 10-year Treasuries to narrow to 33 basis points from 49 in a year’s time.

The Philippine curve may also steepen further as elevated price pressures drive up longer-dated yields while shorter maturities are anchored by the central bank’s pledge to hold off on interest-rate hikes. Bangko Sentral ng Pilipinas has raised its 2021 average inflation target to 4.5% from 4.4%, above its target range of 2% to 4%, citing supply-side pressures.

Long-dated peso bonds will probably face further pressure from a heavy pipeline next year. While the budget deficit is expected to ease to 7.5% of GDP in 2022, the shortfall will still be wider than the pre-pandemic five-year average of 2.4%. With BSP signaling that it’ll continue to slow purchases of government debt for the rest of the year, there appears to be little respite in store.