What Lowe's store closures say about the home improvement market

Lowe’s Cos. (LOW.N) announced it will close 51 underperforming store locations by Feb. 1, 2019 in Canada and the U.S., as part of the hardware store chain’s ongoing reassessment of its business strategy.

The North Carolina-based retailer said Monday that it will close 27 stores, two plants and two corporate locations in Canada. In the U.S., 20 stores will be shuttered.

"While decisions that impact our associates are never easy, the store closures are a necessary step in our strategic reassessment as we focus on building a stronger business," said Marvin R. Ellison, the president and CEO of Lowe's, in a release.

The U.S. big box retailer acquired Quebec-based Rona Inc. in 2016 in a deal valued at about $3.2 billion, following an unsuccessful takeover attempt in 2012.

The federal government expressed concern over potential job losses and said it will continue to monitor the situation closely.

"The Government is concerned for the workers who will be affected by these store closures. We are always concerned to learn about any job losses," a spokesperson told BNN Bloomberg via email.

"At the time of its acquisition of Rona, Lowe’s made legally binding commitments under the Investment Canada Act. These commitments are closely monitored and if required, enforceable." 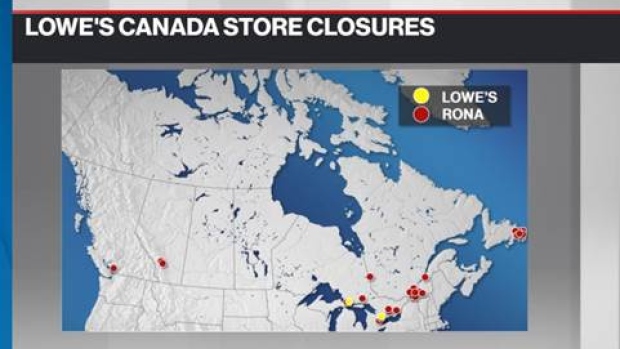 The union representing 260 Rona employees in Newfoundland and Labrador were notified of the closures and handed severance letters on Sunday evening, according to the Atlantic Canada Regional Council of Carpenters, Millwrights and Allied Workers (ACRC). The Rona workers in Newfoundland were told that effective Jan. 27, 2019, they would no longer be employed and Rona will close.

“We are shocked by this news and we are equally shocked at the insensitive and disrespectful manner in which these employees were told this news,” Debbie Romero, executive secretary treasurer of ACRC, said in an emailed statement. “This is a significant economic blow to hundreds of people and to the economy of Newfoundland and Labrador.  Our members, the employees of RONA and the people of Newfoundland and Labrador deserve better from Lowe’s.”

Romero added that the union plans to request an urgent meeting with Lowe’s.

Here are the Lowe’s and Rona stores that will be closed in Canada, according to its website: