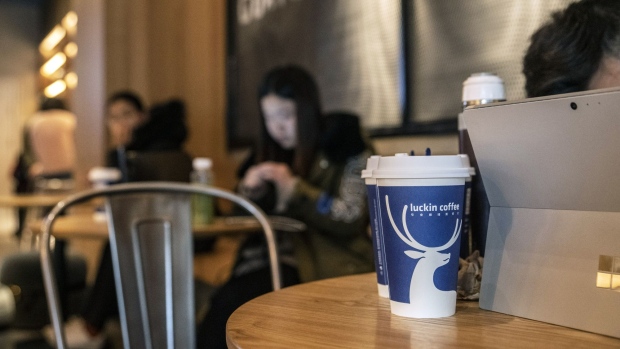 Coffee beverages sit on a table at a Luckin Coffee outlet in Beijing, China, on Tuesday, Jan. 15, 2019. , Bloomberg

The Xiamen, China-based company had net revenue of 1.54 billion yuan (US$219.6 million) for the September quarter, according to a filing Wednesday, compared with analyst estimates of 1.47 billion yuan. Net loss widened to 531.9 million yuan from 484.9 million yuan a year earlier.

Luckin’s latest results provided some comfort to investors who have been looking for progress in the company’s financial position. Shares climbed 7% pre-market to trade above US$20 each. The Chinese startup has faced questions over its strategy of burning millions to lure customers with discounts as it tries to unseat Starbucks as the top java seller in the world’s biggest consumer market.

Luckin’s shares have advanced almost 12 per cent since it was listed in the U.S. in May at a time when many other startups such as Uber Technologies Inc. and WeWork Cos. have been scrutinized for spending heavily chasing blazing growth at the cost of profits. Chief Financial Officer Reinout Schakel said in August that Luckin, which went public in May, is on track to start breaking even at its individual locations this year.

“Sales from freshly-brewed coffee drinks continued to maintain very strong growth, and we believe we will reach our goal to become the largest coffee player in China by the end of this year,” Jenny Zhiya Qian, Luckin’s chief executive officer, said in the statement.

China is becoming an important market for coffee retailers as the traditionally tea-drinking nation develops a taste for java. While weaker consumer spending amid a trade war and slowing economy may present a challenge, the company could benefit from its lower prices.

Luckin claimed only 2.1 per cent of the coffee market in China last year but wants to bolster that by opening more stores in two years than the industry giant has done in 20 years. Starbucks, meanwhile, with more than a 50 per cent market share share in the Asian nation, is also planning to continue its rapid expansion by opening one store every 15 hours.