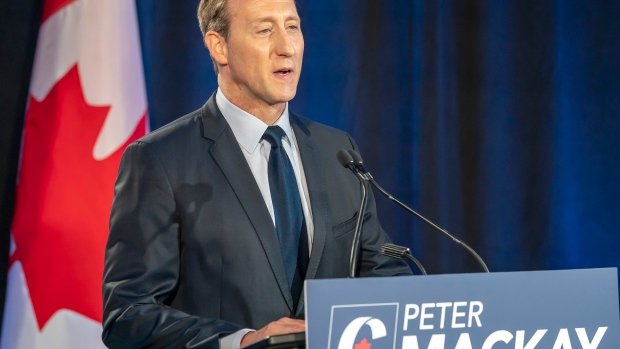 Conservative Party of Canada leadership candidate Peter MacKay makes his opening statement at the start of the French Leadership Debate in Toronto on Wednesday, June 17, 2020. , THE CANADIAN PRESS/Frank Gunn

MacKay went as far as calling O'Toole “Erin Trudeau,” riffing off the last name of the current Liberal prime minister who introduced the national carbon tax.

It was one of several pointed barbs he lobbed at O'Toole during the nearly two hour French language debate that marked the first face-off of the race.

The presumed front-runners used every chance they had to poke holes in each others' records and promises, forcing the moderator to again and again remind them that the two other candidates in the race - Derek Sloan and Leslyn Lewis - might like to jump in.

O'Toole aggressively accused MacKay of lying, saying he would not introduce a carbon tax. His platform does say he would scrap it, though it also suggests a national pricing approach for industrial emitters.

MacKay also accused O'Toole of being a flip-flopper, noting that he had erased a platform promise to end fossil fuel subsidies after significant blowback. That blowback, MacKay alleged, was linked to O'Toole's support from Alberta Premier Jason Kenney.

During a segment of the debate on social issues MacKay made the connection again:

“You are an angry man, Mr. O'Toole you are always angry,” he said. “The same thing applies to your friend, Mr. Kenney.”

During the debate, and to reporters afterwards, O'Toole took issue with MacKay's attacks.

“I was here for a debate tonight, Mr. MacKay just kept speaking to the microphone,” he said.

Kenney's endorsement of O'Toole earlier in the contest was seen as a huge boost to O'Toole's campaign, and a dig at MacKay personally.

MacKay hews from the progressive wing of the party. He was the leader of the Progressive Conservatives when it merged with the Canadian Alliance - Kenney's political home - to form the modern day party.

Though MacKay sought to tag O'Toole with the Trudeau brand, the O'Toole campaign has been running heavily in the opposite direction, seeking to scoop up support among the more right-wing elements of the party who come from the Canadian Alliance days.

MacKay, by contrast, is keeping his focus on his old allies, a choice O'Toole tried to position as a liability Wednesday.

None of the four candidates in the race speak French as their first language and, as they sparred, they also struggled.

The questions were all submitted by party members, and the party said the contenders did not get the specific wording, but only the general themes.

In her responses, Lewis often appeared to be reading directly off prepared notes, and only rarely tried to jump into the wider fray.

Afterwards, she said she had taken two and a half months of lessons to get as far as she could in French, and felt she'd done her best.

“I worked very hard to be able to do this, it was actually very scary to do,” she said.

Sloan, who is a rookie MP from Ontario, said at the beginning of the race he spoke no French, and his goal for this debate was to show he had put in the work to learn it. One way was to deploy a strategy of often not answering the questions and instead posing them to his rivals.

“I wanted to show that it was a priority to me and that I had made great strides,” he said.

Sloan, who made headlines early in the race for suggested socially conservative views, used his opening remarks to restate them.

The primary audience for the debate was Quebec, a province where the party has struggled to gain a lasting political foothold.

In the last election, current leader Andrew Scheer faltered in Quebec, in part due to his own social conservative views.

Whether Sloan, or Lewis - who are both against abortion - could do better in the province is an open question.

They both said after the debates that whomever wins has to find a home for social conservatives in the party, and their supporters have concerns with both MacKay and O'Toole.

Taking a page, perhaps, from a debate in the last election where Scheer was asked repeatedly about his own position on abortion but never answered, MacKay tried to get O'Toole to do the same Wednesday. O'Toole wouldn't take the bait.

“He's not answering because it makes him vulnerable,” MacKay charged.

In questions with reporters afterwards, O'Toole said in French that he is “pro-choice,” and in English that he supports a woman's right to have an abortion, and will defend that right.

But MacKay appeared to do a flip of his own on social issues. He is pro-choice, and early in the campaign he said if he was prime minister, he'd force his cabinet to vote against any effort to introduce legislation on abortion.

Wednesday night, he suggested he'd allow more latitude, given that it was a conscience issue, and instead hope a MacKay cabinet would stick with official party policy on the subject, that a Conservative government would not introduce any legislation to restrict access to abortion.