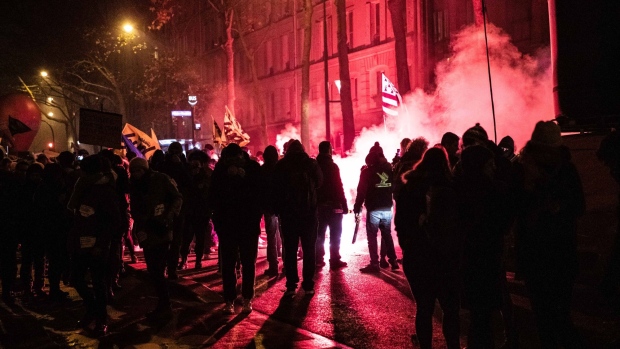 Demonstrators light a flare while protesting during a national strike in Paris on Dec. 5. Photographer: Christophe Morin/Bloomberg , Bloomberg

(Bloomberg) -- Emmanuel Macron is bracing for round-two of a clash with labor unions over his plan to upend France’s pension system, in what could become the defining moment of his presidency.

Labor unions will stage a repeat of last week’s mass protests on Tuesday to load pressure the day before Macron’s government announces the final version of what it says will be a systemic change to the state’s pension system. The protests on Thursday brought more than 800,000 people into the streets, the most since Macron’s term began in May 2017.

Transport disruptions are set to continue today as the strike enters its sixth day, shutting down the majority of metro lines in Paris and preventing more than two-thirds of trains from running nationwide.

Reforming France’s pension system has proven a treacherous task for former French leaders. In 1995, then Prime Minister Alain Juppe abandoned his plans after strikes paralyzed the country for about a month.

Current Prime Minister Edouard Philippe, who worked on Juppe’s failed run for president in 2017, says the government will not budge this time.

“If we do not make a profound, serious, progressive reform today, then someone else will make a truly brutal one tomorrow,” Philippe said in an interview with the Journal du Dimanche newspaper Sunday.

But unions are refusing to blink. In the same newspaper, Philippe Martinez said the leftist CGT union he leads will continue striking until the government withdraws the reform.

“In 1995, at the start of the protests, Juppe said he would never withdraw his plan. Things change fast and there’s a lot of anger,” Martinez said.

According to a survey by IFOP Dec 6 and Dec 7, 53% of French people support or have sympathy for the protesters.

The Paris police has ordered shopkeepers along the route of Tuesday’s march to shut down and protect their premises from potential looting. French civil-aviation authority DGAC asked airlines to reduce their schedules by 20%, and Air France said it would cancel 25% of its domestic flights.

So far, the protests have had limited economic impact, according to the government. While tourist cancellations are a concern, shops around the country had a good weekend of sales, Junior Economy Minister Agnes Pannier-Runacher said on French TV channel CNEWS Monday.

“One day of strikes doesn’t tip retailers into a difficult situation,” Pannier-Runacher said. “If it goes on, making it hard for customers to get to shops, it could bring down revenues.”

Macron’s pension overhaul aims to create a universal points-based system to replace France’s 42 different pension regimes for different classes of workers. The 41-year-old president argues France’s current system is unfair and inapt for the 21st century economy, in which workers change sectors during their careers.

In an effort to find common ground, ministers met with unions for a last round of talks on Monday. The government says it wants to make the transition to a new system gradual and fair, without delaying it for decades.

“I’m sure we will find the right point of balance that will reassure workers about their future, without giving up on our determination to push the country toward the future by putting in place a universal system,” Philippe said last week after the first round of marches.

To contact the editors responsible for this story: Geraldine Amiel at gamiel@bloomberg.net, Vidya Root