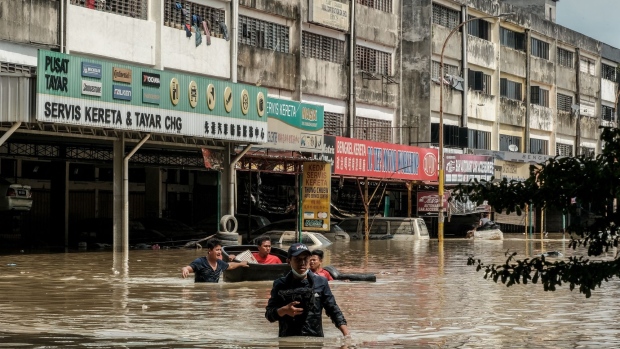 Residents wade through floodwaters in the Taman Sri Muda township of Shah Alam, Selangor, Malaysia, on Monday, Dec. 20, 2021. Floods hit the Southeast Asian nation annually during the monsoon season, but those at the weekend were the worst in years. , Bloomberg

(Bloomberg) -- Malaysian Health Minister Khairy Jamaluddin said it would be highly risky to hold a general election during the year-end monsoon season, amid calls from within the ruling United Malays National Organisation party for polls to be held soon.

The election should be held before or after the rainy season, given public concerns about flooding, Khairy said. Malaysia’s northeast monsoon season typically runs from November to March, according to the weather office.

“My view is that it’s not going to be outside of these two windows -- before the floods, or immediately after, say, after Chinese New Year,” Khairy, an UMNO member, said in a group interview at his office in Putrajaya on Friday.

A national vote is not due until September next year, but Prime Minister Ismail Sabri Yaakob is under pressure from factions within UMNO to bring forward the vote. In recent weeks, Ismail has dropped his initial public opposition to early elections, telling reporters that the polls would be held soon.

To be sure, opposition and ruling politicians alike have objected against the prospect of an election during the monsoon season. The floodwaters late last year left dozens dead and displaced thousands of people, with overall losses topping 6 billion ringgit.

Still, concerns about an expected slowdown in the global economy in 2023 could spur early elections.

“Unless the global economic headwinds shift, many countries will start seeing more moderate growth next year,” Khairy said. “So that’s a key consideration for having the election, as I said, latest by the first quarter of next year. Whoever governs the country will need a fresh mandate to make some very key, strategic and sometimes tough decisions.”