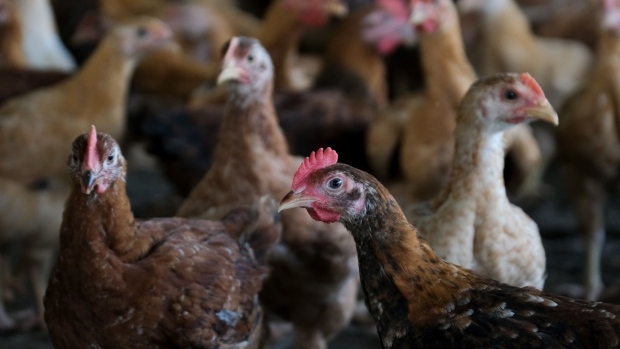 Chickens at the Chicken and Vegetables Farm Meranti facility in Puchong, Selangor, Malaysia, on Monday, March 14, 2022. Global food prices are at all-time highs, with a benchmark UN index soaring more than 40% over the past two years. , Bloomberg

(Bloomberg) -- Malaysia’s government met with the country’s biggest poultry producers to discuss subsidies and ensure continuity of local supply as the country moves to ban exports of chicken starting next month.

The poultry ban is the latest in a series of protectionist moves as nations around the world battle rising food costs, partly driven by the war in Ukraine crimping food supplies. Indonesia recently temporarily banned palm oil exports, India restricted wheat exports, and Serbia and Kazakhstan have imposed quotas on grain shipments.

Malaysia’s decision is likely to hit hard in Singapore, which sources a third of its chicken supply from Malaysia, as well Thailand, Brunei, Japan and Hong Kong.

The Malaysia Competition Commission is also investigating reports that there are cartels that control the price and output of chicken among large companies, Ismail said, promising stern action against any firms found sabotaging supply.

“If it’s true these cartels exist, we will take legal action against them,” he said. State news agency Bernama reported that there was a shortage of poultry locally as cartels had planned to stop farm operations over the weekend.

Last week Ismail abolished the approved permit rules for imports of some food items including chicken, cabbage and evaporated milk to secure adequate food supplies in the country.