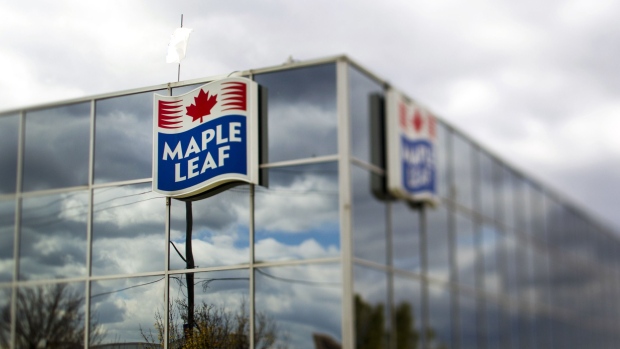 Maple Leaf Foods Inc. signage is displayed outside of the company's processing facility in the photo taken with a tilt-shift lens in Toronto, Ontario, Canada, on Monday, Oct. 17, 2011. , Brent Lewin/Bloomberg

MISSISSAUGA, Ont. - Maple Leaf Foods Inc. beat expectations as it reported a fourth-quarter profit of $25.4 million, up from $17.5 million a year ago, and sales that rose more than 10 per cent.

The food processing company says the profit amounted to 20 cents per diluted share for the quarter ended Dec. 31, up from 14 cents per share a year earlier.

Sales for the quarter totalled $1.13 billion, up from $1.02 billion in the fourth quarter of 2019, as both its meat protein and plant protein groups saw gains.

Analysts on average had expected an adjusted profit of 21 cents per share and $1.07 billion in sales, according to financial data firm Refinitiv.