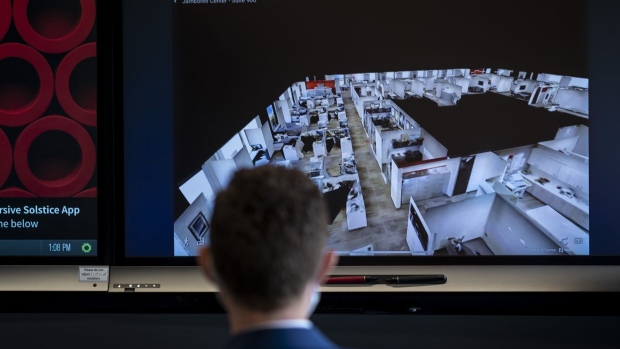 Matterport, a secure product used to show clients spaces virtually, is demonstrated at a JLL office in the Aon Center in Chicago, Illinois, U.S., on Thursday, June 24, 2020. After a three-month mandatory hiatus, corporations and their employees have largely adjusted to working from home successfully, but surveys suggest workers having a desire to get back to normal routines over working from home permanently. Photographer: Christopher Dilts/Bloomberg , Bloomberg

(Bloomberg) -- Matterport Inc. is set to begin trading Friday on the Nasdaq under the symbol MTTR, after seeing a surge in demand for its 3D mapping products during the pandemic.

The software company is raising more than $600 million by merging with special purpose acquisition company Gores Holdings VI Inc. and through a related funding round led by Tiger Global Management, Dragoneer Investment Group and others. The equity of Matterport and Gores Holding VI, backed by billionaire Alec Gores, is valued at $2.9 billion.

Matterport’s public debut comes at a pivotal time for the Sunnyvale, California-based company, which has evolved from a slow-growing maker of pricey 3D cameras to a subscription software company aiming to help create and manage digital versions of the world’s physical spaces.

Matterport board member and investor Peter Hébert said that selling proprietary cameras was a critical intermediary step for the startup on its way to building a market and developing its software, but that the strategy stalled its larger ambitions. “We were basically just hawking cameras,” said Hébert, who first invested in Matterport in 2013 through Lux Capital, where he’s a managing partner. “We lost sight of the power and potential for a number of years.”

As technical advances in depth sensors accelerated industrywide, Matterport shuffled its leadership, hiring former EBay Inc. Chief Product Officer RJ Pittman as its new chief executive officer in late 2018. Pittman said he saw the potential for Matterport to be a data company, and was in the process of switching its focus toward subscription software company when the pandemic hit.

“Everything came to halt,” Pittman said. But the pause was brief.

The pandemic-era halt in in-person visits accelerated demand for Matterport’s 3D renderings of physical spaces. The rush also pushed the company to release its first-ever smartphone app, which allows users to create a digital twin of their property in minutes.

The change was swift. In 2020, Matterport’s revenue grew by 87% to $86 million, and for the first time, it made more money on software than hardware and services. Matterport expects revenue to hit $123 million in 2021 and to exceed $202 million in 2022, according to a presentation it made to investors. It predicts that the majority of those sales will come from licenses and subscriptions.

Matterport customers include Nationwide Mutual Insurance Co., Redfin Corp., Georgia-Pacific LLC and dozens of others who use digital representations of physical spaces to cut costs and speed operations. Some museums, schools and first responders have also signed on. Meanwhile, third-party developers like real estate companies and virtual staging services can bake Matterport’s tools into their own services, an area Matterport believes is poised for more growth.

Matterport is far from the only digital imaging company. The startup still faces stiff competition from competitors including Havenly Inc. and Modsy as well as Zillow’s 3D Home app and Cupix Inc.’s 3D tour.

“We are innovating like the wind to maintain our category leadership and make sure we don’t give it away,” Pittman said. “The greatest risk is execution risk.”