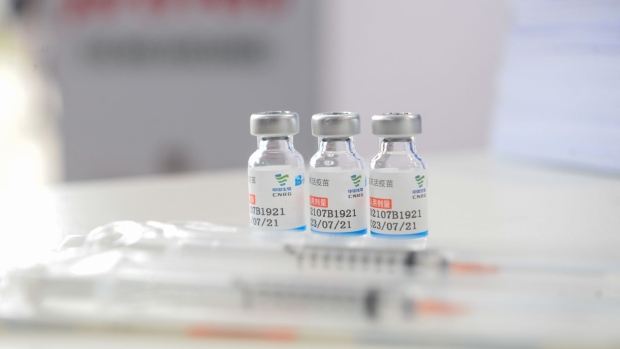 Vials of the Sinopharm Group Co. Covid-19 vaccine at a mass vaccination event for teachers at the Jose Granda school in Lima, Peru, on Friday, Sept. 3, 2021. President Pedro Castillo took office after a contested election and is now overseeing a vaccination campaign that shows only 25% of the population fully vaccinated and over 2.1 million cases of Covid-19. Photograph Photographer: Miguel Yovera/Bloomberg , Bloomberg

Mauritius will offer Covid-19 booster shots from Sept. 23 to people who received double doses of the Sinopharm vaccine to avert future coronavirus surges.

“The campaign will start with people who had their second dose four months ago,” Health Minister Kailesh Jagutpal told reporters in Port Louis, the capital, on Tuesday.

Nations from Israel to the U.S. have either started administering booster shots or plan to as the contagious delta variant threatens efforts to end the pandemic. Mauritius will become the second country in Africa after the Seychelles to do so as new surges could threaten plans for the island nation to attract tourists.

Health officials, including the World Health Organization Director for Africa Matshidiso Moeti, have called the rollout of Covid-19 booster shots by a growing number of nations a “mockery of vaccine equity,” with less than 4% of the continent fully vaccinated against the virus.  Mauritius is yet to decide on which booster to give those who were inoculated with AstraZeneca Plc’s Covishield and Covaxin vaccines at the beginning of the vaccination campaign in January, he said.

The tourism-dependent economy has begun to see a decline in cases after a surge in recent months. Asymptomatic cases have fallen to 64 from 272 on Sept. 1., according to Health Ministry data.

Mauritius is set to reopen its borders to fully vaccinated tourists with a negative PCR test on arrival from Oct. 1.

Of about 1.3 million people in Mauritius, 67% of the population have received a first dose and 62% have completed the course, according to Jagutpal.