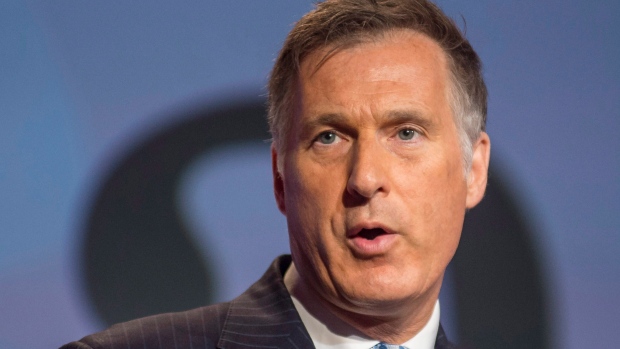 In a speech to a business audience, the Quebec MP outlined what he called an ambitious plan to unleash Canada's productive forces even as he thumped familiar Conservative tropes.

"Prosperity does not come from government spending but rather from entrepreneurs' investing," Bernier told receptive members of the Canadian Club.

"More spending on the scale offered by the Liberal government is not going to stimulate the economy and bring us prosperity, it will act as a sedative for the economy."

Bernier said his proposal to axe the tax might sound radical, but he pointed out the levy did not exist before the Liberal government of Pierre Trudeau introduced the measure in 1972. Abolishing it, he said, would encourage people to save and invest more and lower the cost of capital for start-ups.

Generally speaking, when an asset or property is sold, 50 per cent of any profit is subject to tax. As a result, investors are discouraged from selling assets and investing in productive new ones because of a reluctance to trigger the gains tax, Bernier said.

While such a measure would cost the treasury about $3 billion a year in foregone revenue, Bernier said the economic benefits would "vastly exceed" the losses.

"The capital gains tax is a tax on investment," said the bilingual Bernier, who spoke only in English. "The more you tax something, the less of it you will get."

The Harper government cut the rate to 15 per cent from 22 per cent but that wasn't enough, he said, even though the country's combined federal and provincial rate is in the middle when compared with other developed countries.

"I propose to bring down the federal rate to 10 per cent," Bernier said.

Some economists are predicting anemic growth of 1.3 per cent this year, a barrier to improvements in Canada's standard of living, he said.

Bernier has previously announced other proposals, including one to scrap supply management -- long considered a Conservative sacred cow. It's time, he said, to stop taking billions of dollars out of the private sector only to distribute the money through subsidies he said amount to corporate welfare.

In an interview after his speech, Bernier fudged when it came to social questions such as abortion -- an issue of special interest to social conservatives -- although he recently denounced an idea from rival candidate Kelly Leitch to screen would-be immigrants for "Canadian values."

Any MP is free to table a bill on abortion and, if it was up to him, he would allow a free vote in the Commons, Bernier told The Canadian Press. However, he refused to say where he stands on limiting a woman's right to terminate her pregnancy.

"Personally, I will see," he said. "I don't want to personally have a position on that."

Instead, he said, he wanted to focus the debate on economic concerns with his tax ideas.

Bernier warned what might happen if interest rates were to rise in light of record high debt levels carried by Canadians. Artificially low rates have created a bubble in various sectors of the kind that led to the crash in 2007, he said.

Last month, Bernier introduced a plan to scrap foreign ownership limits on airlines that serve domestic markets in order to create an “open sky policy” – a move that he said would help bring down costs for Canadian air travellers. He also pledged to privatize Canada’s 26 major airports.