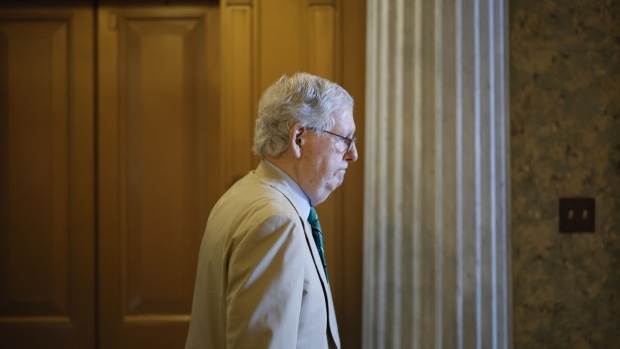 Senate Minority Leader Mitch McConnell, a Republican from Kentucky, walks through the US Capitol in Washington, D.C., US, on Thursday, May 26, 2022. Democratic and Republican senators grasping for some common ground on gun laws and school safety after the massacre of 19 students and two teachers in Texas are working under a short timetable, and prospects are dim for an expansive agreement. , Bloomberg

The China bill, which provides more than $50 billion to subsidize US semiconductor chip manufacturing, has been stalled as the House and Senate try to resolve differences in their approaches.

“Let me be perfectly clear: there will be no bipartisan USICA as long as Democrats are pursuing a partisan reconciliation bill,” McConnell said in his tweet, using an acronym for the proposed legislation.

A Schumer spokesman, Justin Goodman, accused McConnell of “holding American jobs in key US industries hostage to help China and protect his friends in big pharma.”

McConnell has the power to block the bipartisan competition bill in the 50-50 Senate using the chamber’s filibuster rule, which requires 60 votes to advance most legislation outside the budget process.

Democrats have been striving to pass the economic package, which under special budget rules needs only a simple majority vote, before the scheduled August congressional recess. With their razor-thin majority in peril in the November midterm election, they want to promote the legislation as an inflation-fighting measure.

So far Senate Democrats are in basic agreement on prescription drug provisions in the package that would cap out of pocket costs for seniors and allow Medicare to negotiate drug prices, saving the government hundreds of billions of dollars. Some tax provisions are being pared back to make them ore business friendly.

Schumer and Democrats had hoped to have the China competition bill finished by the end of July. The long-stalled legislation was already at risk of collapsing in Congress, with Republicans growing skeptical of the measure as midterm elections near and Democrats focused on other issues, including the gun safety bill that was signed into law.

The bill would provide billions of dollars to boost research and development with an eye toward creating new technologies to help the US stay ahead of a rising China. A key provision of the bill would provide $52 billion in grants and other incentives for domestic semiconductor manufacturing.

The House and Senate are negotiating to reconcile their differing versions of the legislation but have hung up on key points, including trade provisions and whether to include tax credits for chipmakers.

To thwart McConnell, Democrats could attempt to shoehorn the chips funding and other parts of the China bill into their budget bill, although they would drive up the cost. But under the budget rules they are using regulatory and foreign policy aspects of the China bill would likely not be allowed in.

The delays in passing the bill could have significant economic consequences. Intel Corp. has warned that it may reconsider its plans to build one of the world’s largest semiconductor facilities in Ohio if Congress does not pass the bill with funding for chip facilities soon.

Schumer had led the bipartisan push for the competition legislation, working last year with Republican Senator Todd Young to pass the Senate’s version.