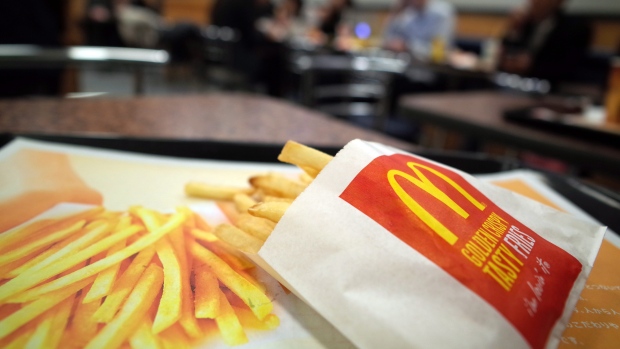 A small fries is seen at a McDonald's restaurant in Tokyo, Wednesday, Dec. 17, 2014. , AP Photo/Eugene Hoshiko

Fries are notorious for not traveling well -- often arriving at the other end in a mushy, cold and unappetizing state. But the food has become McDonald’s No. 1 delivery item since the company began offering the service through Uber Technologies Inc.’s UberEats. And satisfaction rates are high, said Lucy Brady, the chain’s senior vice president and global chief strategy officer.

To ensure that fries can weather the journey, employees take pains to make certain they’re as hot and fresh as possible before being added to bags, she said. And they’re typically delivered within 30 minutes, helping prevent them from wilting en route, Brady said.

“The first thing everyone was concerned about is: Will the fries be hot and fresh?” she said in interview. But patrons are having a great experience, she said.

The stakes are high for McDonald’s to get it right. The company sees restaurant delivery as a $100 billion market that could help maintain growth in the U.S. Some investors have become concerned that McDonald’s expansion is flagging: Shares of the fast-food giant dipped on Tuesday after its domestic sales failed to top Wall Street estimates.

McDonald’s has expanded its delivery service to more than 5,000 U.S. locations after a small test in Florida last year. Chief Executive Officer Steve Easterbrook, who took the helm in 2015, also is looking to a new mobile app to help keep customers loyal.

The other top sellers for McDonald’s delivery service include Big Mac meals, double cheeseburgers and McNuggets.

Customers who order delivery food also are more likely to tack on desserts, Brady said. Items like McFlurries -- another thing that desperately needs to be delivered quickly -- have helped make the average check as much as twice as big as in-store orders. UberEats also charges a booking fee, typically about $5, that can vary by location.

Another quirk of delivery customers: They’re more likely to order McDonald’s for dinner. About 60 per cent of delivery is 4 p.m. or later -- higher than in its restaurants.