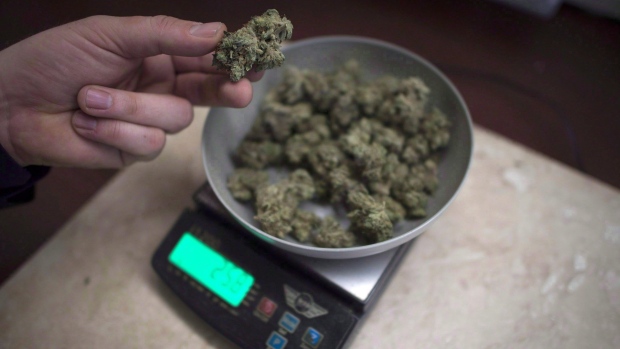 Marijuana is weighed at a medical marijuana dispensary, in Vancouver, Wednesday, Feb. 5, 2015. , THE CANADIAN PRESS/Jonathan Hayward

A medical pioneer whose research breakthrough on inflammation led to the creation of some of the world’s top-selling drugs is embracing medical marijuana.

Marc Feldmann, an immunologist who helped discover a class of drugs that includes Humira and Remicade, has co-founded CannBioRex Pharmaceuticals, a Toronto-based company researching the potential medical uses of synthetic cannabis.

As medical marijuana regulations ease in the U.S. and around the globe, Feldmann, a professor at the University of Oxford, said cannabis could form the basis for a new class of drugs to treat pain and other conditions.

“There is massive potential, but it’s not yet understood,” Feldmann said in an interview. “It’s never been tested properly.”

Feldmann, who is from Australia, and co-founder Raphael Mechoulam, an Israeli chemist known for his work with the compounds found in cannabis, started experimenting with using marijuana to treat inflammation in the late 1990s, finding that it worked on mice.

That came after Feldmann had made a major breakthrough that helped develop drugs to treat rheumatoid arthritis, inflammatory bowel disease and other conditions. At the time, he was looking for a new research project and Mechoulam, who was on sabbatical from a position in Jerusalem, showed up in the U.K. and they worked on cannabinoids.

They had promising early results, but with marijuana prohibition still widespread, they struggled to raise money to continue the research and eventually abandoned the project.

“We couldn’t find any support,” Feldmann said. “It made no sense, but at some point you gracefully give up and move on.”

Fast forward more than a decade, and attitudes around marijuana, and particularly its potential medical uses, have changed dramatically. GW Pharmaceuticals, a British company, has created the first marijuana-derived drug to be approved by the U.S. Food and Drug Administration, and medical pot is now legal in more than 30 states.

Feldmann said the new company will need to raise at least US$100 million to conduct the research and trials necessary to get a cannabis-based drug to market. Feldmann disagrees with the notion, prominent in some corners of the marijuana industry, that pot is most effective, whether for medical or recreational uses, when it comes from a plant. Synthetic cannabis is the key to a new class of drugs, he said.

“The basis of science is things you can measure accurately and reproduce,” he said. “We’re not interested in arguing with the evangelists, they’re right to a point. There are benefits to the plant. But we believe this is a stepping stone to doing it better.”