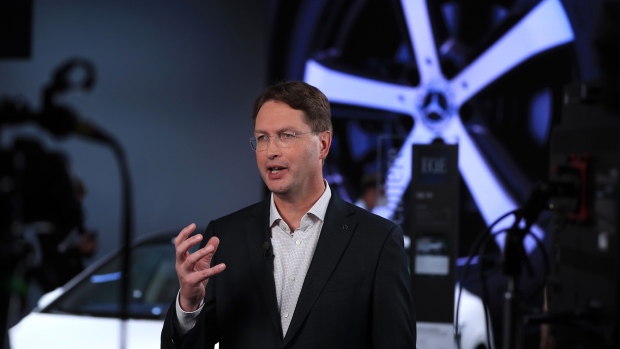 (Bloomberg) -- For Ola Kallenius, the chief executive officer of Daimler AG, one of the lessons of the global chip shortage is that it’s time for an upgrade.

Daimler’s Mercedes-Benz unit, the world’s biggest luxury carmaker, has partnered with Nvidia Corp. to develop chips for sophisticated features like automated driving and AI-powered infotainment systems. But that’s not the component that’s been wreaking havoc on Mercedes’s supply chain this year.

“What’s short are the simplest parts, the dollar-a-pop,” items like the chip that locks and unlocks a car door, Kallenius said in an interview at Mercedes’s U.S. headquarters in Atlanta. “What we’re doing together with the chip producers is trying to migrate some of those simpler, older node technologies into more modern nodes where there’s more capacity.”

The entire auto industry is making that same shift, he said.

The global chip shortage has been an historic test for the century-old industry just as it tries to accelerate a shift toward smarter, electric vehicles. After sounding an optimistic note in the first half of the year as soaring car prices padded their profits, automakers slashed forecasts for sales growth in 2021 after lockdowns in Malaysia to control Covid-19 choked off chip supply.

Mercedes took the biggest hit among major U.S. luxury carmakers in the third quarter, with U.S. sales falling 21% from July through September compared to 2020. That allowed rivals BMW AG and Toyota Motor Corp.’s premium Lexus brand to gain share, according to researcher Edmunds, which uses a mix of estimates and actual sales figures. Kallenius said Mercedes’s chip supply should gradually improve in the fourth quarter.

The German luxury marque is taking steps to address bottlenecks as the first deliveries of its EQS sedan, the electric version of its flagship S-Class, arrive at U.S. dealerships. Mercedes plans to bring at least five electric cars to the U.S., starting with the EQS, and followed by a pair of electric SUVs made at its Tuscaloosa, Alabama, plant next year.

Electric vehicles will help boost U.S. sales in the next few years, rather than simply cannibalizing combustion-based models, Kallenius said. But he’s become resigned to the fact that supply chain bottlenecks could make for a slow start.

“Let’s just recognize that we will have to live with a level of uncertainty until these turbulences go away,” he said he told his sales and marketing teams. “Most customers are very understanding -- they read the newspaper too, and they understand something is going on.”