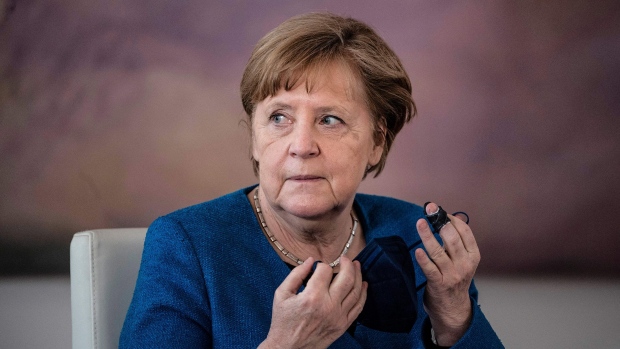 German Chancellor Angela Merkel takes off her face mask as she attends an official dismissal and appointment ceremony at the Bellevue presidential palace in Berlin on May 20, 2021, a day after German politician Franziska Giffey resigned from her post as Minister for Family Affairs, Senior Citizens, Women and Youth over claims she plagiarised her doctoral thesis. , Photographer: JOHN MACDOUGALL/AFP

(Bloomberg) -- Germany’s outgoing Chancellor Angela Merkel is stepping up pressure on unvaccinated people in the country.

According to a Chancellery paper obtained by Bloomberg, Merkel is recommending that people not fully vaccinated be prevented from going into restaurants, movie theaters and non-essential shops. She is also calling for mandatory Covid shots starting in February 2022.

The proposals are part of measures Merkel will discuss in a video conference Thursday with Olaf Scholz, her designated SPD successor and current finance minister, together with Germany’s 16 state leaders. Both Merkel and Scholz had excluded mandatory vaccinations until the recent sharp jump in the number of new infections. Scholz, due to be sworn in as Merkel’s successor next week, has voiced support for her proposals.

German clinics are facing a “particularly dangerous situation,” the head of the country’s DIVI intensive-care medicine lobby warned on Wednesday. The number of patients in ICUs will reach 6,000 by Christmas, exceeding the peak during the second wave of the pandemic last winter, DIVI president Gernot Marx told ZDF television.

About 71 percent of people in Germany have so far received at least one shot. Merkel is aiming for 30 million additional shots by Christmas.