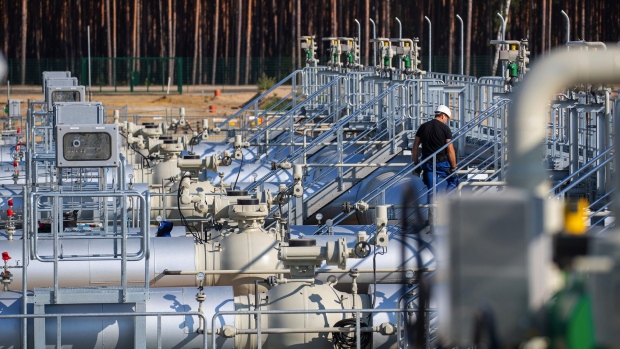 A construction worker passes between pipework on the European Gas Pipeline Link (EUGAL) Radeland 2 compressor station, which accommodates downstream gas flows from the Nord Stream 2 project, in Radeland, Germany, on Tuesday, Sept. 22, 2020. Nord Stream 2, which is designed to carry as much as 55 billion cubic meters of Gazprom PJSC’s gas to the EU every year, is seen by opponents as the Kremlin tightening its energy grip on the region. Photographer: Krisztian Bocsi/Bloomberg , Bloomberg

(Bloomberg) -- German Chancellor Angela Merkel has welcomed the decision by U.S. president Joe Biden to drop most of the sanctions against the disputed Nord stream 2 pipeline project.

“Of course President Biden has moved a bit into our direction in the context of the Nordstream 2 conflict”, Merkel told public broadcaster WDR on Thursday. However, Germany and the U.S. continue to have different views of the disputed project, Merkel made clear. “But we will continue to talk about our common interests in our relation with Russia.”

Merkel said that she will talk to Biden about the issue at the sidelines of the Group of Seven summit in Cornwall next month. She left open, however, what Germany will offer the Biden administration in return.

“Partnerships consist in considering the other side’s point of view and to find compromises,” she said. “You only talk about deals once they have been finalized.”

The U.S. decision to waive some Nord Stream 2 sanctions “is a constructive step,” German Foreign Minister Heiko Maas said Wednesday in Berlin. Germany will continue the talks with the U.S. “as constructively as possible” to try and alleviate concerns over the project, he told reporters in Berlin.

Construction on the pipeline began in 2018 and it became a major source of friction between the U.S. and its European allies, particularly Germany, during former President Donald Trump’s administration. Biden has essentially taken the same position as Trump: that the project undermines European security by tying the continent more closely to Moscow.

In Germany, the perception is that Biden has given up the fight on this not only because he didn’t want to jeopardize relations with Germany but also because he needs German support against China.

Four vessels were sanctioned by the U.S. in the latest round of penalties over the pipeline, along with entities including the Russian government-owned Marine Rescue Service.

But it’s the reprieve on sanctions for Nord Stream 2 and Warnig, a German citizen, that really matter. The waiver avoids escalating a confrontation with Merkel’s government and is in keeping with Biden’s goal of working closely with allies despite their disagreements.

The 1,230-kilometer (764-mile) pipeline will help Germany secure a relatively low-cost supply of gas amid falling European production. It’s also part of Gazprom’s decades-long effort to diversify its export options to Europe as the region moves away from nuclear energy and coal.