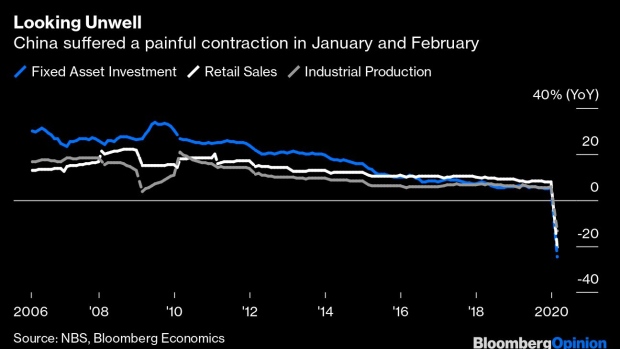 (Bloomberg Opinion) -- Lockdowns imposed to control the coronavirus have battered China’s appetite for everything from coal to copper, pushing stockpiles of raw materials higher and global prices lower. The next crunch could come from supply. The risk of an outbreak is growing in ill-prepared producer countries, with mandatory quarantines and border shutdowns threatening to choke off production.

Prices of bulk commodities are already seeing some support from such disruptions, as ports and mines close. Coking coal in particular has outperformed owing in part to Mongolia’s decision in late January to seal its border with China, which cut off a key source of supply. The impact may be only short term. With factory shutdowns spreading through the U.S. and Europe, the reduction in wider metals supply would need to be dramatic to offset crumbling global demand. Upheaval could provide some price support regardless.

Appetite for virtually all commodities has slumped since January, when the extent of damage from the novel coronavirus became clear. Even where mills, smelters and factories stayed open, that largely translated into crammed warehouses. China’s industrial production, investment and retail sales for the first two months of the year plunged across the board, with construction particularly weak. China’s economy is now all but certain to contract in the first quarter from a year earlier.

With European automakers and other manufacturers shuttering operations, the drop in commodity demand in the first three months is likely to be even worse than during the global financial crisis. Steel demand will fall more than a fifth, copper will slide 14% and aluminum almost a third, analysts at BMO Capital Markets estimate.

It hasn’t helped futures prices that the latest wave of closures is coming as we head into the second quarter, usually a peak period for demand. China, by contrast, was worse hit during the quieter Lunar New Year. Copper, a bellwether of confidence in global manufacturing, has tumbled to four-year lows of around $4,800 per metric ton on the London Metal Exchange.

Travel and quarantine restrictions have already damaged supply, making it harder for miners to fly employees in and out and impeding projects under construction. Peru’s quarantine has already prompted Anglo American Plc to stop all nonessential work at its $5 billion Quellaveco project and withdraw most of the site’s 10,000 staff and contractors. Canada’s Teck Resources Ltd. has suspended work at its Quebrada Blanca Phase 2 in Chile, while Rio Tinto Group says work has slowed on its underground mine at Oyu Tolgoi in Mongolia.Lockdowns may be even more severe. Copper mines are among the worst affected as Chile and Peru, the world’s top two producers, scramble to contain the virus, prompting Anglo American, Antofagasta and others to send staff home. Chilean state behemoth Codelco will work at reduced capacity for two weeks, while workers at BHP Group’s Escondida, the world’s largest copper mine, threatened action to compel the company to take more preventative steps. The miner said Saturday it would reduce the number of contractors onsite. Analysts at Bank of Nova Scotia estimate a two-week halt in operations in those two countries would amount to 325,000 tons of lost production — roughly 4% of their combined annual output. This serves to underline the geographical concentration of a handful of key materials. Lithium is produced mainly in Chile and Australia, while iron-ore exports are dominated by Australia and Brazil. The price surge after last year’s Vale SA dam disaster shows what a port closure could do to the iron-ore market, though such a move appears unlikely given the huge budget contribution that the material makes to Brazil and Australia.

Many producer countries are developing economies and ill-equipped to handle an epidemic that has floored even the world’s richest nations. In Brazil, the response has been patchy at best, with some states taking measures that are increasingly at odds with the federal government. Poorly implemented lockdowns, as seen in the Philippines, could push thousands of casual workers out of cities in search of work in more remote areas — potentially extending the spread.

If more drawbridges are raised, expect supplies from explosives and tires to heavy equipment to get blocked, hampering even mining operations that could otherwise keep going. In the meantime, low prices will hurt some higher-cost projects, though rock-bottom prices for oil, a significant input, will cushion the blow. This will affect smaller producers first, given the healthy balance sheets of big miners. Still, operations like Rio’s Pacific Aluminium, or pricey U.S. copper mines, look vulnerable.

Demand was the first part of an unprecedented crunch for the global commodities industry. The second act is only beginning.