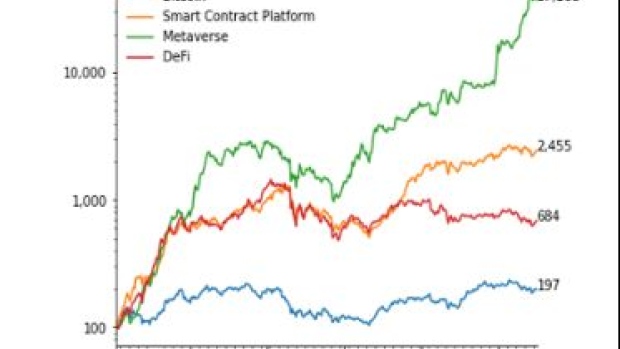 (Bloomberg) -- A hypothetical iteration of the internet called the metaverse appears to be the hottest trend in cryptocurrencies this year, beating even the world’s largest digital asset.

“The clear outperformer this year has been the metaverse,” Macro Hive’s team including Dalvir Mandara and CEO Bilal Hafeez said in a newsletter published Thursday. “Returns appeared to be turbocharged by Facebook’s decision to rebrand to Meta.”

Macro Hive sliced up the cryptocurrency world into four key trends and created indexes -- Bitcoin, smart contracts, metaverse and decentralized finance --  benchmarking popularity by measuring the performance of the tokens that underpin those trends. Apart from the Bitcoin index, which just tracks the value of that digital asset, each index is made up five coins.

The meta index is made up of tokens representing play-to-earn gaming platform Axie Infinity, decentralized 3D virtual reality platform that sells parcels of digital land Decentraland, plus Sandbox, Enjin Coin and Gala. The DeFi index is represented by Aave, Maker, Compound, Uniswap and PancakeSwap. And smart contracts are represented by tokens of programmable blockchains Ethereum, Solana, Cardano, Avalanche and Polkadot.

Meta shows momentum, gaining 20% over the past seven days, compared to Bitcoin, smart contracts and DeFi, which all declined modestly over the same period.