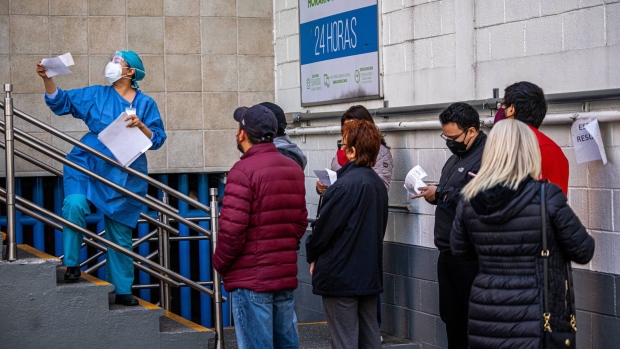 A healthcare worker delivers Covid-19 test results in Mexico City, Mexico, on Thursday, Jan 6, 2022. Mexico's Covid-19 cases soared past 15,000 for the first time since September as the omicron variant spread, but the country’s stockpile of unused vaccines stood near 50 million and jabs slowed to a crawl over the holiday season. , Bloomberg

Since Jan. 3, occupancy levels have doubled to 58%, according to a federal data base for public hospital availability that samples about one fifth of all hospitals. A total of 1,441 people were hospitalized in the city as of Monday, nearly a fourfold increase from the 383 patients in public and private hospitals across at the start of the year, according to Mexico City data.

“The number of cases has been so big in such a short time, that doctors and nurses are getting sick too, so our capacity to tend to patients has been diminished,” said Brenda Gomez, infectious diseases specialist at ABC Medical Center. “We’re seeing an important saturation in private hospitals.”

The capital is registering about 7,000 daily cases, city authorities said, well past the peaks seen in other waves. Though hospitalizations are increasing, most patients aren’t showing serious symptoms and are mostly staying off ventilators, authorities said. Some 225 patients are currently on assisted breathing machines.

While there is some disparity between local and federal figures, Mayor Claudia Sheinbaum said last week there’s no saturation problem and hospitals are able to add more beds if needed. City official Eduardo Clark said the city’s data differs from the federal one because many hospitals reconverted their beds from Covid to regular care, so the numbers are skewed.

Nationwide, hospital occupancy for general beds stands at 31% and at 17% for beds with ventilators. Baja California Sur, home to tourist destination Cabo, shows occupancy at 76%, while other nine states are above 50%.

New daily cases in the country reached an all-time high of 47,113 on Saturday. One of those recently infected was President Andres Manuel Lopez Obrador, who tested positive for the second time in a year on Jan. 11. He reappeared for his usual daily press conference on Monday.

“It’s demonstrable that this variant isn’t as serious as the previous delta variant in symptoms and the length of recovery,” he said. “It’s a very contagious variant and cases are growing but hospitalizations aren’t and neither are deaths.”

Mexico City has the highest vaccination rate in the country with about 95% of adults fully vaccinated while 91% of teens 15 and older have received at least one dose. The city says 51% of senior citizens and 38% of health care workers have received booster shots.

Clark said 84% of those who are hospitalized in the city’s public hospitals aren’t fully vaccinated. Test positivity stands at 35.4%, according to city data.

“It’s clear we’ve seen a jump in hospitalizations over the past few days,” Clark said at a weekly press conference on Friday. “But thankfully, this time around we’re seeing a different curve in terms of how many of those who are hospitalized show serious symptoms.”