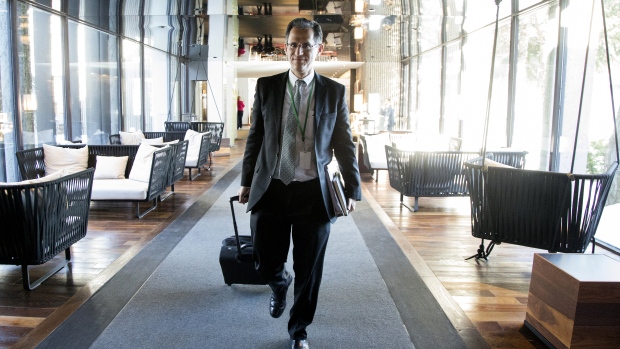 Mexico’s chief NAFTA negotiator headed to Washington as the nation reiterated that it’s prepared to pursue a new bilateral trade deal with the U.S. even if it ends up leaving out Canada.

Kenneth Smith Ramos and his team plan to work on wording of the U.S.-Mexico trade agreement that President Donald Trump intends to sign by the end of November. His visit is the first by a high-level Mexican negotiator since the two nations announced a framework deal at the end of August. Meanwhile, Canadian officials are huddled with Prime Minister Justin Trudeau in Saskatchewan, relaying the latest state of play two weeks after the nation rejoined talks to stay in the pact.

Guajardo said that while U.S. rules dictate the Trump administration must release the text of the agreement by Sept. 30, from a practical perspective the nations need 10 days to two weeks before that deadline to prepare their presentations of the deal.

Canadian Foreign Minister Chrystia Freeland is leading the push to hammer out differences for a deal. Trudeau at a caucus retreat in Saskatoon on Wednesday repeated that no deal on a new NAFTA is better than a bad one for Canada.

Trudeau in televised remarks said that Canada “won’t sign an agreement that isn’t to our advantage. It would be better not to sign any agreement in such a case.”

The U.S. and Canada remain at odds over a handful of core issues. They include anti-dumping dispute panels contained under Chapter 19 of the current deal, which the U.S. wants to remove and Canada wants to keep, and Canada’s protected dairy sector, which isn’t in the current deal but where the U.S. wants greater market access. Another point of contention is cultural industries, where Canada is seeking to preserve an exemption. Intellectual property and pharmaceutical patents are among other issues.

“NAFTA is trilateral deal, and that fact is a great asset,” Guajardo said. "If in the end we see a scenario that we don’t expect nor hope for but can’t be ruled out -- that there’s no agreement between Canada and the U.S. -- then Mexico needs to take the next step, advancing on a bilateral deal, if it’s necessary. But I repeat, we’re betting that the trilateral nature is maintained.”

Smith Ramos and his team will seek to meet with both U.S. and Canadian negotiators during the Washington trip, according to a person familiar with the plans, who asked not to be named discussing private conversations.

Trump has threatened to hit Canada with auto tariffs if a deal can’t be reached to revamp NAFTA. On Tuesday, Trump struck an upbeat tone, telling reporters that the deal-making with Canada “is coming along very well and we’ve all been dealing in good faith.”