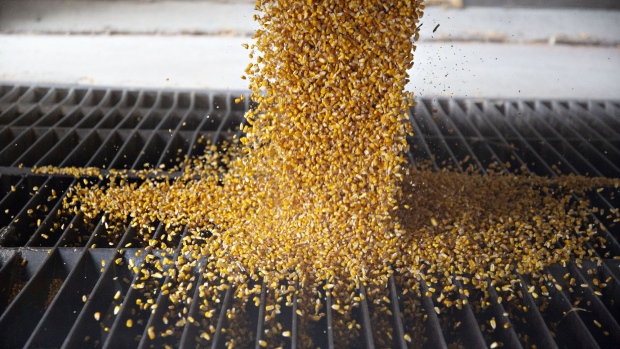 Corn is unloaded from a grain truck at the Michlig Grain LLC elevator in Sheffield, Illinois, U.S., on Tuesday, Oct. 2, 2018. Having all three North American countries agree on a trade deal has given traders and farmers reassurance that some flows of agricultural goods won't be disrupted, particularly to Mexico, a major buyer of U.S. corn, soybeans, pork and cheese. Photographer: Daniel Acker/Bloomberg , Bloomberg

(Bloomberg) -- Mexico is analyzing an increase in import quotas for food items including corn to help slow inflation if it doesn’t ease as expected, according to the nation’s top trade official.

The country is studying measures to increase market competition, just as it did for products including chicken, pork, beef and gas, Mexican Economy Minister Tatiana Clouthier said in an interview in Washington on Friday.

Inflation “has to do with the demand happening not only in Mexico, but in the world,” Clouthier said. “We talked to the central bank a week ago, and we’re following closely to see what other things can be done.”

Clouthier spoke after two days of meetings with Biden administration officials, business representatives and legislators in her first trip to the U.S. since being tapped for the job by President Andres Manuel Lopez Obrador in December.

As economy minister, Clouthier is responsible for overseeing Mexico’s industrial and trade policies, including implementation of the U.S.-Mexico-Canada agreement, a trade pact negotiated at the demand of former President Donald Trump to replace the North American Free Trade Agreement that had been in effect for a quarter century.

Mexico and Canada constantly jockey with China for the status of America’s top trade partners, with more than $1 trillion in goods crossing the borders annually. But the three nations have clashed in recent weeks, and on this trip Clouthier and U.S. Trade Representative Katherine Tai failed to resolve a dispute over trade rules for cars, threatening the goal of boosting regional manufacturing under their new trade pact.