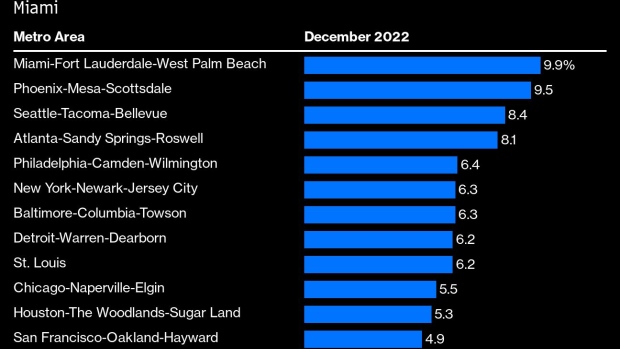 (Bloomberg) -- Miami’s stubbornly rising housing costs landed it atop the US in inflation last month, even as a cooling of prices nationwide helped most regions see substantial improvement.

Annual inflation in the Miami metropolitan area fell slightly to 9.9% in December from the last recording of 10.1% in October. Phoenix, which ranked at the top for most of last year, saw a more significant cooldown in consumer-price growth over the period, to 9.5% from 12.1%, according to Bureau of Labor Statistics data.

In both cities, inflation remains high by pre-pandemic standard.

But in Miami, prices are still sky high. Shelter costs surged by 3.9% from October to December, according to Consumer Price Index figures. Housing prices in CPI tend to lag real-time rental changes because most tenants are locked in long-term leases. Still, even private data show monthly asking rent prices in the South Florida city aren’t slowing down as fast as other parts of the country.

Nationwide inflation dropped to 6.5% from 7.1% in November, in large part because of falling gasoline prices that offset housing and food costs.

The federal government tracks prices in 23 metro areas, with New York, Los Angeles and Chicago reporting every month and the other cities alternating every other month. Among the cities that reported inflation in November, Tampa, Florida, led with an annual price increase of 9.6%.