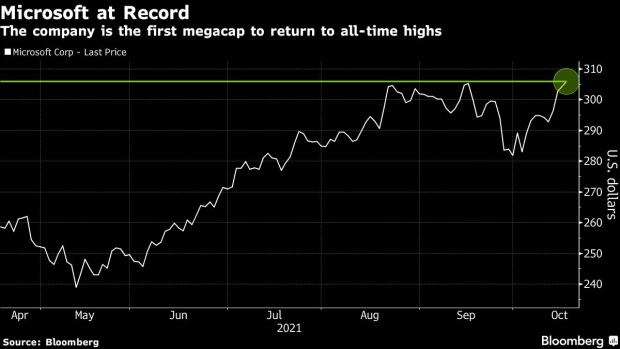 (Bloomberg) -- Microsoft Corp. shares rose to their first all-time high in about two months on Monday, with the software company emerging as the first mega-cap stock to return to record levels after concerns over rising bond yields pressured the group in recent weeks.

The stock rose 1% to $307.38, hitting its first intraday record since Aug. 20. The company is on track for a fourth straight positive session, and it is up about 9% off a recent low.

The record comes ahead of Microsoft’s first-quarter results, which will be released Oct. 26. Earlier, Morgan Stanley wrote that it sees “building momentum across Cloud and Hybrid solutions, which should power a strong Q1 top-line” for the company. Analyst Keith Weiss added that the stock “represents a rare combination of strong secular positioning and reasonable valuation within the software space.”

Among other major technology and internet stocks, Apple Inc. rose as much as 0.8% on Monday, while Alphabet Inc. gained 0.6%, Amazon.com Inc. rose 0.9% and Facebook Inc. outperformed with a 3.4% gain.