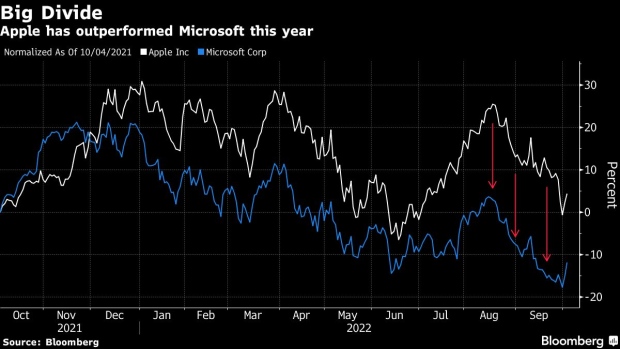 (Bloomberg) -- In the stock market contest this year between the two biggest US companies, Microsoft Corp. has been no match for Apple Inc. With consumer spending under threat from a possible recession, some analysts are betting that performance is about to turn around.

Their valuations might be similar, but their business models are quite distinct. Much of Microsoft’s almost $200 billion of annual revenue comes from providing essential software and services to businesses. Meanwhile, Apple is more at the mercy of consumer demand and is exposed to markets like Europe and China.

“Microsoft has an advantage because it’s a sticky business,” said Gene Munster, managing partner of Loup Ventures. “You get the benefit of that stickiness during a recession. Microsoft most likely outperforms Apple over the next six months based on that.”

Microsoft shares have fallen 26% this year, wiping $669 billion from its market value, as the dollar soared against other currencies, reducing the value of the company’s international sales. Meanwhile, the iPhone maker has proved more resilient, with its stock down 18%, benefiting from investor perception that it’s a relatively safe haven in a bear market.

With bargain hunters on the prowl, Microsoft has rallied 6.9% this week as the market rebounded and Apple rose 5.7%, as of Tuesday’s close.

Neither stock qualifies as cheap: Both are hovering around 23 times estimated earnings for the next year, in line with the Nasdaq 100 Index. Yet for Apple, that’s a big premium to its 10-year average multiple of 16.9, and Microsoft is close to its long-term average of 21.7.

And while analysts estimate that Microsoft will report double-digit revenue growth over the next two years, Apple’s growth is forecast to slow to 5% in the same period, according to Bloomberg data.

Microsoft looks notably cheaper than Apple on another metric used by growth investors, the so-called PEG ratio, or the price-earnings multiple divided by the expected percentage increase in earnings. The software giant’s PE is 1.7 times the forecast rate of profit growth, versus 2.2 times for Apple, according to Bloomberg data.

With the Federal Reserve pursuing a series of interest rate increases to cool inflation, those sales and profit estimates may still be too high if a recession hits. Still, Apple may be more at risk, given that it produces and sells iPhones in China, where the economy is already teetering.

“The software maker is better positioned to survive a recession and has lower exposure to China for assembly and sales than Apple,” Bloomberg Intelligence analyst Anurag Rana said.

The wild ride for Twitter Inc. shareholders isn’t over just yet. Shares of the social media company are down 2% on Wednesday after surging 22% Tuesday after Elon Musk said he intends to close his deal for the San Francisco-based firm for the original price of $54.20 per share. The massive rally is the latest in a long line of twists and turns for the stock since the acquisition was first announced in late April, including a termination letter sent by Musk in July that sent the stock tumbling to a closing low of $32.65.