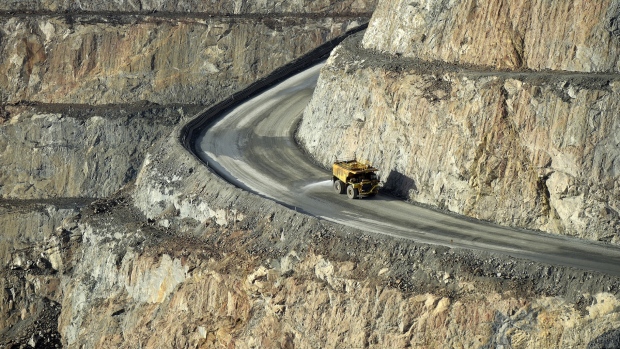 A dump truck travels along an access ramp at an open pit mine. , Photographer: Carla Gottgens/Bloomberg

ENRC, once listed on the FTSE 100 Index, asked London’s High Court in a filing this month to force the Serious Fraud Office to withhold any charges until the completion of a review by a retired judge. ENRC alleges that the SFO investigation went beyond what is allowed for a prosecutor.

"It would be unlawful for the SFO investigation team to take any charging decisions arising from or in relation to the criminal investigation without getting to the bottom of the serious concerns of wrongdoing," ENRC’s lawyers wrote.

The claim is the latest volley in a strategy to stifle one of the biggest corruption probes in the U.K. It presents a test of the top prosecutor’s resolve and of how easily wealthy corporations can pressure the judiciary to stave off scrutiny.

“The SFO does not accept ENRC’s position in its judicial review claim and our investigation into ENRC and others is ongoing,” the agency said in an emailed response to questions.

ENRC was founded by three Eastern European billionaires who won control of valuable mining assets during the post-Soviet privatization in Kazakhstan. In 2007, the owners listed the company in London and it shot into the FTSE 100. They took it private again once the SFO started, in 2013, looking into whether the company had paid bribes in Kazakhstan, the Democratic Republic of Congo and Zambia. The three billionaires also shifted the mining assets into a new entity called Eurasian Resources Group.

ENRC has also asked the court to compel the SFO to reinstate an independent review by retired high court judge David Calvert-Smith, who is also the former head of public prosecutions for England and Wales. Last year, the SFO initiated the review after allegations by ENRC that the agency had mishandled materials and colluded with the company’s former lawyers. The SFO dropped the Calvert-Smith review in June, after ENRC sued the agency for $93 million to compensate it for its legal costs resulting from the probe.

ENRC has filed multiple cases related to the investigation, and last year won a landmark ruling that strengthened the attorney-client privilege in the U.K. An appeals court in September said the company didn’t have to hand over documents that were part of their former lawyers produced for their own probe.

To contact the reporter on this story: Franz Wild in London at fwild@bloomberg.net

To contact the editors responsible for this story: Anthony Aarons at aaarons@bloomberg.net, Christopher Elser, Lynn Thomasson