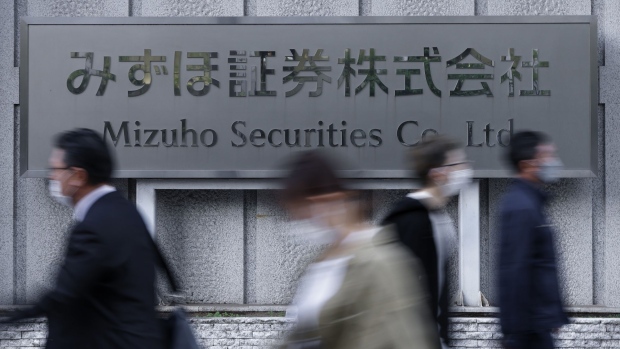 (Bloomberg) -- Rakuten Group Inc. shares jumped the most in more than four months on news that Mizuho Financial Group Inc. is in talks to acquire a stake in the e-commerce giant’s securities unit.

Mizuho’s brokerage unit may buy a 20% stake in Rakuten Securities Inc. for about 80 billion yen ($554 million), people with knowledge of the matter said. An agreement could come by the end of the week, the Nikkei newspaper reported late Wednesday.

Shares of Rakuten jumped as much as 9.5% on Thursday morning in Tokyo, the biggest intraday gain since May 13, paring this year’s decline to 39%. Mizuho, Japan’s third-largest bank, rose 0.2%.

Billionaire Hiroshi Mikitani’s Rakuten has struggled since it made a big push into Japan’s saturated mobile market to compete with NTT Docomo Inc., KDDI Corp. and SoftBank Corp. The group’s quarterly operating loss widened from a year ago, and S&P Global Ratings last month gave it a negative credit outlook, citing cash pressures.

A stake purchase of the size and price reported could boost Rakuten Securities’ sum-of-the-parts value by 8% to about 4.2 trillion yen, according to Bloomberg Intelligence analysts including Marvin Lo and Shin Tamura. The price implies a “hefty” price-to-book ratio of almost three times, versus 1.2 times for rival Monex Group Inc., they wrote in a note.

Rakuten said in May that it’s preparing a listing for its securities unit as the e-commerce giant diversifies its business. It’s not clear what Mizuho’s stake purchase would mean for the initial public offering, which hasn’t been scheduled.

Conditions for IPOs have deteriorated this year as investors get spooked by a global stock market slump. Rakuten is also planning to list its banking unit, and chose Goldman Sachs Group Inc. and Daiwa Securities Group Inc. as lead managers for the offering last month.

Japan’s biggest banks have been struggling to build scale in their online securities businesses and compete with industry leaders like SBI Holdings Inc. and Rakuten. Sumitomo Mitsui Financial Group Inc. in June agreed to take a 10% stake in SBI, the country’s largest online brokerage.

“Mizuho Securities is likely to be attracted by the growth in Rakuten’s online accounts (40%) and assets under management (54%), the highest pace of all Japanese brokers in fiscal 2022,” the BI analysts said.

Mizuho and Rakuten are in talks for various alliance opportunities, including investment in Rakuten Securities, but nothing has been decided, the bank said in a statement. Rakuten Group issued a similar statement.